During the last days of August, State Representative Steve McCarter (154th Legislative District) hosted a House Democratic Policy Committee Hearing on Perception vs. Reality and the Science of Global Warming and Climate Change right in our own backyard at Curtis Hall in Wyncote.

As Executive Director of TTF, I was honored to be part of this hearing, which featured three panels of experts who addressed climate change and its relationship to science, public policy, and media and public perception. Our role was to read the testimony of Barbara Kingsolver, Author and National Humanities Medalist. I am embarrassed to admit that I had never read any of Ms. Kingsolver’s work, but knew that Steve and Deb McCarter are big fans. I was a little nervous about reading her statement, but when I read through it before the hearing, I found myself thinking, “I can read this…I agree with everything she says!” 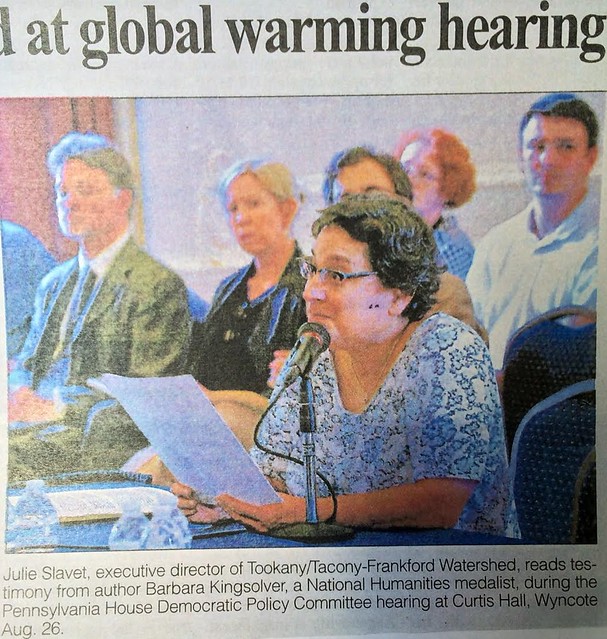 Here’s her first and second paragraph:

Greetings, women and men of the legislature, the press, and the public. I appreciate your interest in climate change. And I thank you for accepting a written testimony in lieu of my presence, which is my way of saving fossil fuel. We’re all learning to tighten our energy budgets while expanding our communities and our spheres of compassion.

Nothing interests me more, or worries me more, than climate change. I believe it’s a phenomenon that will revise the human story in our world more forcefully than any other we’ve ever considered. I worry abstractly about how civilization will adapt, and concretely, I worry about my own daughters. I think of their generation pursuing their lives in a planet that is no longer the gentle, predictable world in which we evolved, learned to tend the soil, and make our homes. I think about unthinkable facts — for example, that about a quarter of the world’s people, who live in China and South Asia, get their water supply from Himalayan glacial caps that are suddenly disappearing. I think about extinctions, droughts, fires, food shortages, rising sea levels, refugees, and increasing political instability all over the globe, and I wonder, “Now what?”

It was an honor for us to be involved in this informative hearing, along with colleague Adam Garber of Penn Environment and the other experts and leaders on this topic particularly former Congressman Wayne Gilchrist, Eastern Shore Land Conservancy and Dr. Richard Alley, Penn State University. Here’s a link to the agenda.

Even in our 30 square mile watershed, we are feeling the impact of climate change. It’s encouraging that we can count on our local elected officials to rely on expert scientists to help us figure out what we need to do to next about this challenge.