We recently hosted our very first guided history tour through Tacony Creek Park! Despite light rain, our adventurous group met on June 27 at the I St. and Ramona Ave gateway to walk the trail and talk creek, mills, bridges and sewers. 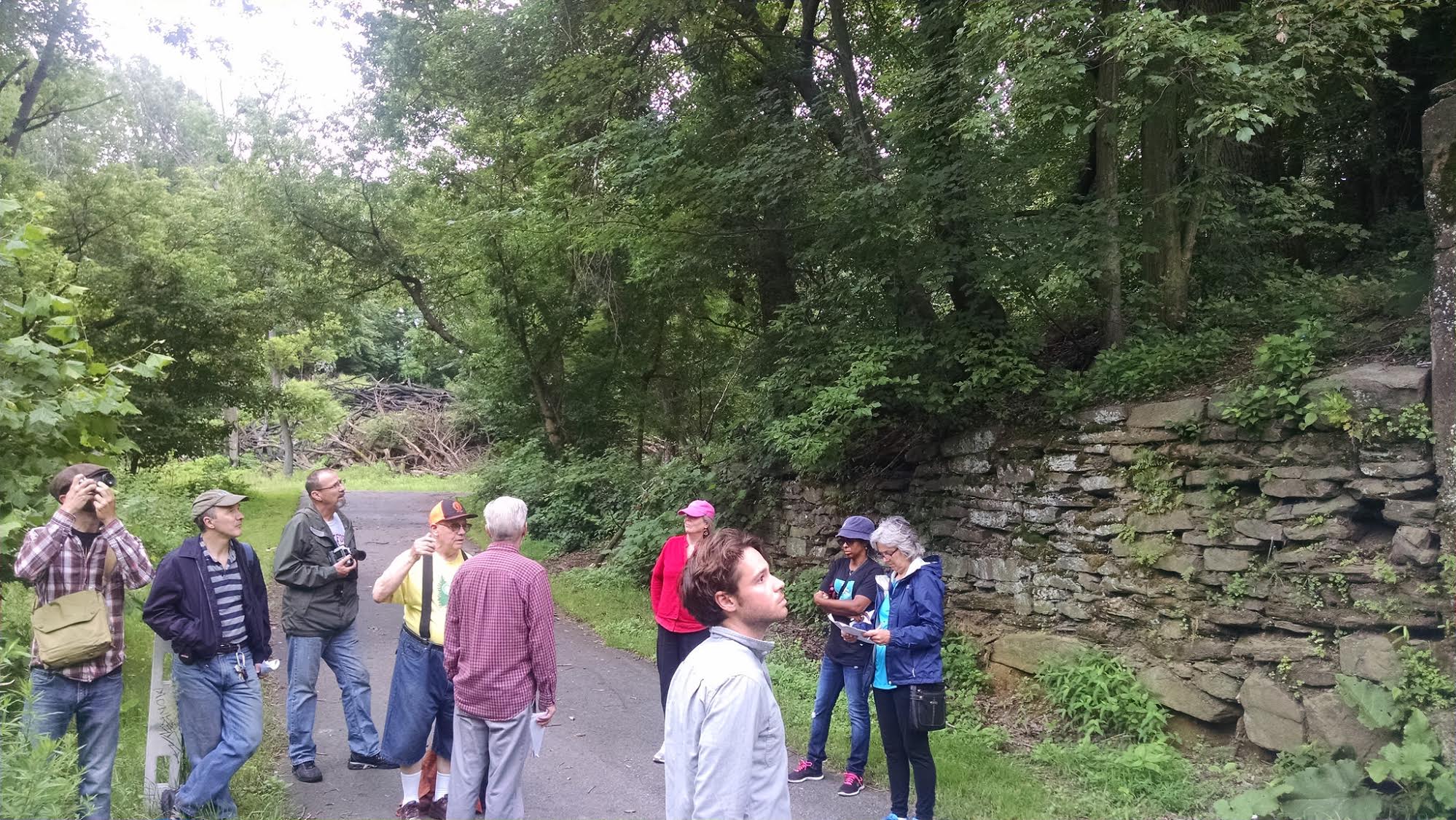 Local historian Fred Maurer was our guide and shared with us some of his vast knowledge of the area. Armed with an array of maps and atlases, we looked at the documented change in the landscape, as well as land-use over the years.  These included the 1843 Ellet map, 1895 & 1910 Bromley maps, and the modern day park map for a reference (2015). 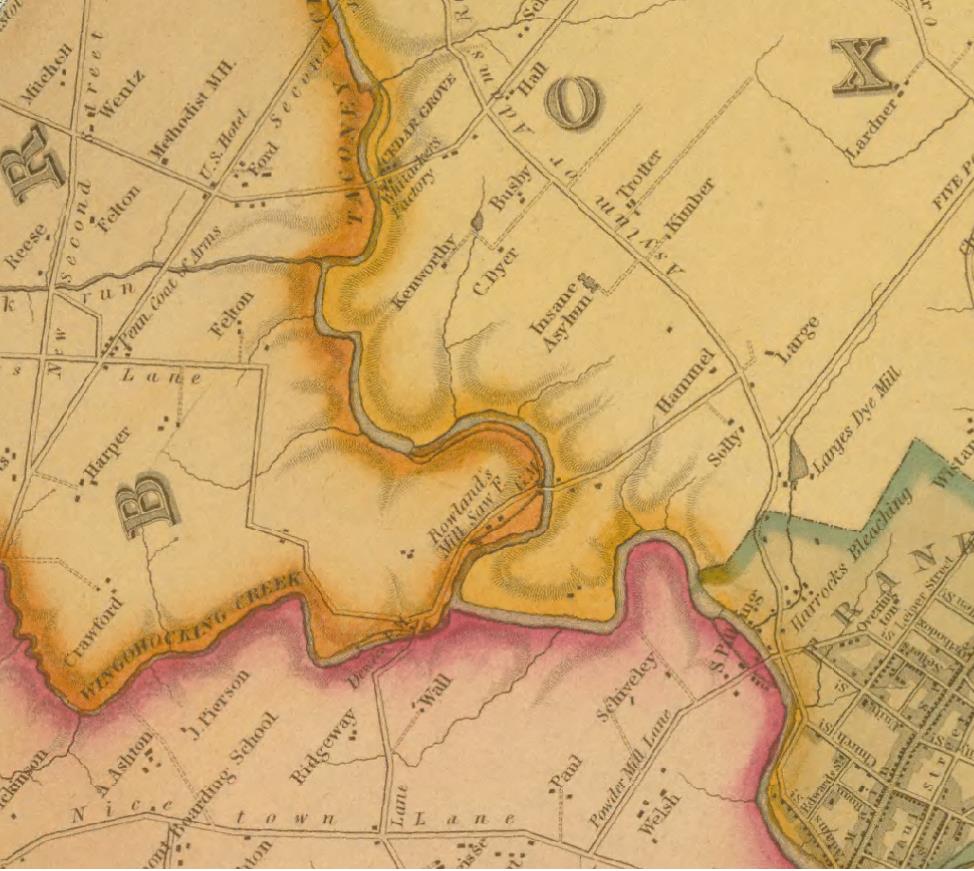 The past 400 years have witnessed a lot of change!  Until the late 1600s, the native Lenni Lenape people used the Tacony-Frankford watershed as hunting grounds — the creek’s historic names translate to ‘heavily wooded stream’ and ‘uninhabited place.’

When European immigrants arrived, they saw the streams as a means to generate power and began constructing mills along the creek. These were typically grist mills, grinding wheat to flour. Later, most were converted to small tool and metal works manufacturing. A mill required building a dam and carving out a mill race in order to direct water across a wheel, turning the machinery and equipment inside. The two known mills in this particular stretch of the Tacony Creek were Buzby’s Mill (shown on a 1752 Scull & Heap map) and the Rowland Saw-Mill. The exact location of Buzby’s is unknown, but maps show that it was in the same vicinity as the Saw-Mill.

Downstream of where the Saw-Mill once stood can be found Fishers Lane bridge.  Built in 1796, it’s the oldest stone bridge in our watershed, connecting Bristol Township to the west and Oxford Township to the East. 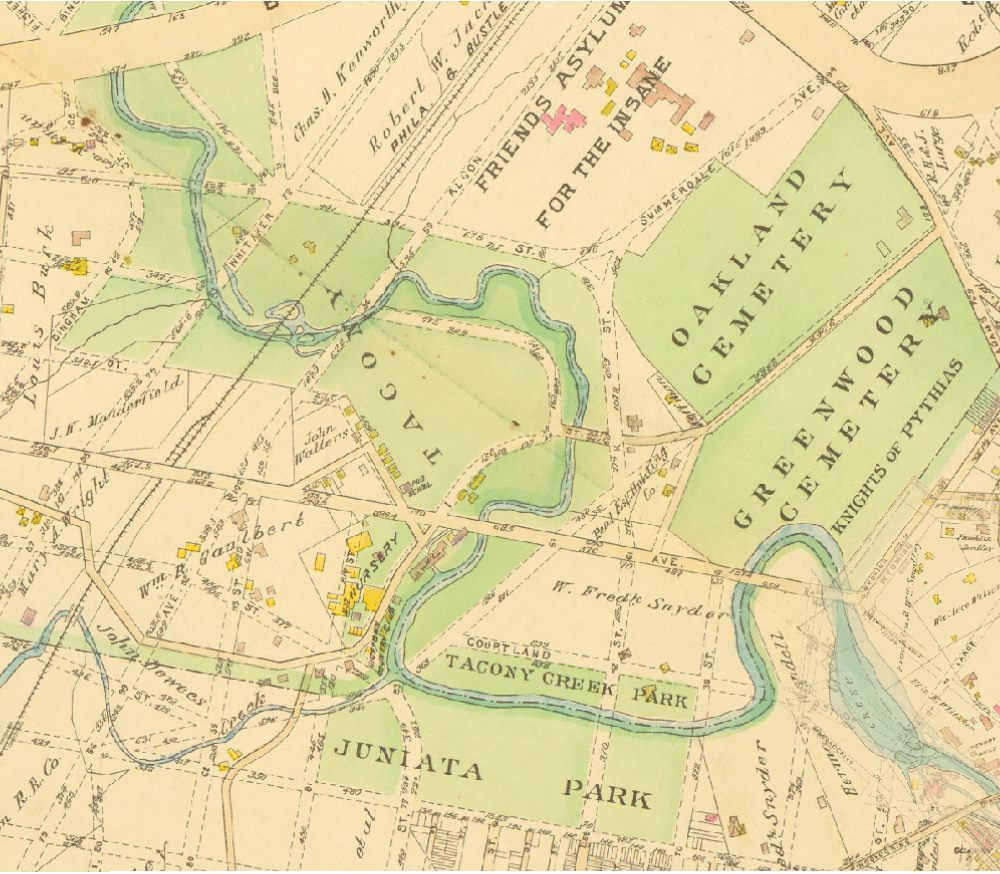 Most of these mills and dams are no longer visible, but their construction began a trend of manipulating the creek for a growing manufacturing industry. As technology advanced, water-driven mills began to be replaced by coal-fired, steam-driven machinery. Many of the old mills, if not converted to perform other tasks, were abandoned or lost to fire and eventually demolished. 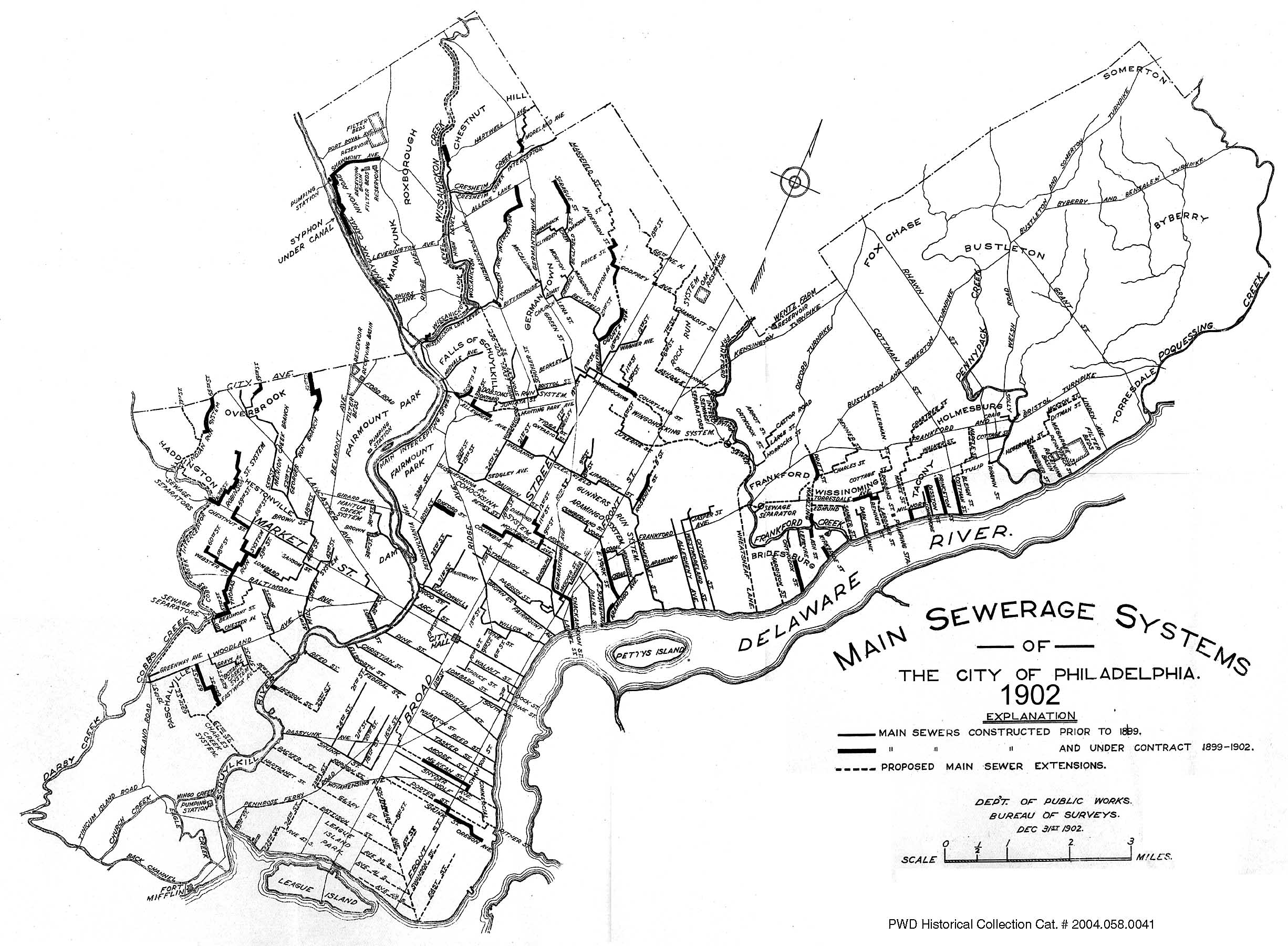 During the Industrial Revolution, the creeks and streams of Philadelphia were used as open sewers, a place to throw human and industrial waste. The growing problems of disease and flooding prompted city engineers to take what we might now consider an extreme approach: to encapsulate nearly all of the city’s streams into enclosed sewers.

Miles of sewers were constructed and their floodplains were filled and leveled, effectively erasing any trace of these streams.  Aside from the main stem of the Tacony Creek, all of the smaller feeder streams and tributaries were eventually put into buried sewers. This includes the Tacony’s sister stream, the Wingohocking, which was nearly as large. The point where the Wingohocking meets the Tacony is where it’s name changes to Frankford.

With construction starting in the 1880’s, the last of the Wingohocking Creek was encapsulated by 1928. The mouth of the creek is now the largest combined sewer outfall in the city, 21′ high by 24′ wide, capable of discharging large volumes of stormwater and sewage directly into Frankford Creek during rain storms.  The sewer itself runs right under I St. & Ramona Avenue, below the gateway where we began our tour.  On a rainy day you can hear the outfall roar! 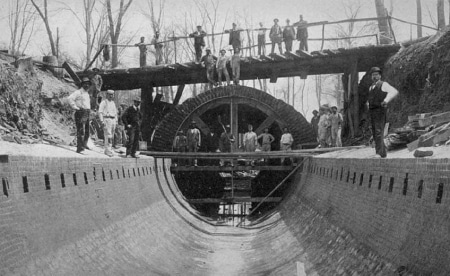 The Tookany/Tacony-Frankford creek has changed dramatically through the years, and its surrounding watershed is far from the pristine hunting grounds it once was.  We hope that by looking back at once was, we can encourage people to value the remnants that remain.

Interested in more TTF history?  Shop Amazon.Smile for your own copy of Grubbtown Monument, by Fred Maurer.  A portion of the sale will support our work. 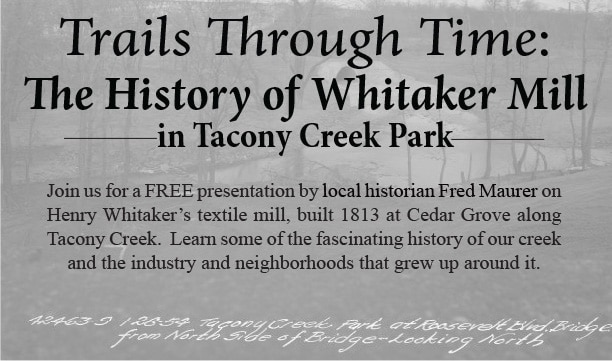 Interested in working with us to restore the health and vitality of the Tookany/Tacony-Frankford Creek? We’d love to have you join us for a walk or another event. Here’s our Calendar.

Stay tuned for upcoming events in our Trails Through Time series, including our next presentation on Henry Whitaker’s Textile Mill on July 18 at the Historical Society of Frankford. RSVP here.