TTF established a Trash Task Force to address trash and illegal dumping in the creeks in our watershed in late 2012. The Task Force includes representatives of key municipal agencies and other organizations and is coordinated by TTF as part of our Outreach and Education efforts in Tacony Creek Park supported by the Philadelphia Water Department.

The Trash Task Force has met regularly over the past three years, and has convened three subcommittees: Education & Outreach, Monitoring, and Physical Prevention. TTF contracted with Temple University’s Department of Geography and Urban Studies to focus on a specific outfall area to identify the types of trash that accumulate in storm drain inlets over time. The goal of the project is to better understand the characteristics and sources of litter in relation to our watershed and to make recommendations for addressing litter throughout the Philadelphia region.

In December 2013, the Temple University team began monitoring the 51 sewer inlets that drain to the T-04 outfall on Rising Sun Avenue. The inlets are observed approximately once a week for observable pieces of litter, categorized by type within a 1 foot area surrounding the inlet. This determination is based on the high probability of nearby debris to end up in the inlet. Although each inlet contains a catch basin which traps many floatable materials, litter still manages to enter our watershed. 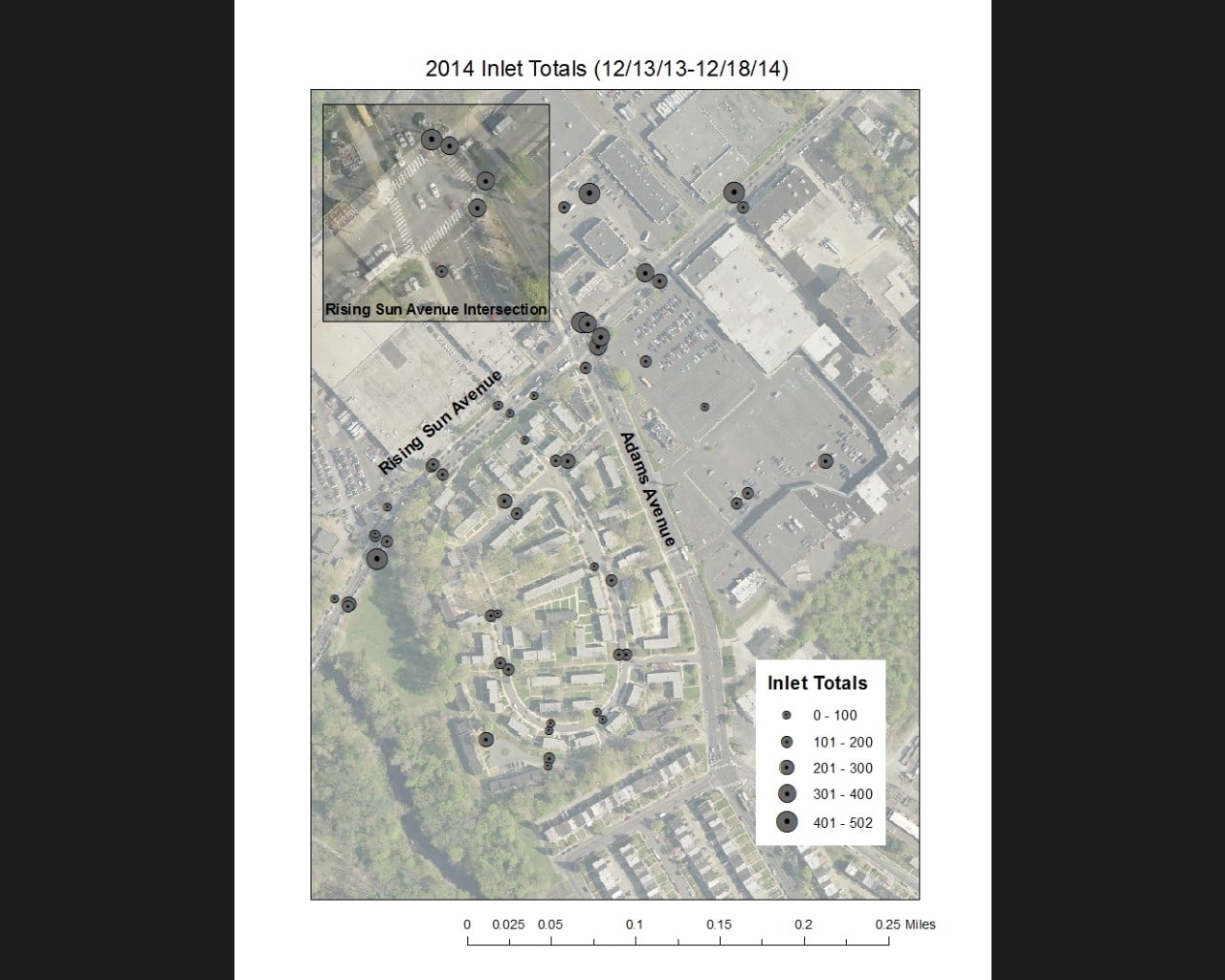 As seen in the above map, litter in the T-04 outfall area tends to concentrate around the intersection of Rising Sun and Adams Avenue. This area is where the 18 and K bus routes cross paths, creating a significant amount of foot traffic in the area. The transfer stop to the 18 Route, which is the third highest trafficked route on SEPTA, does not have a trash can. Passengers often leave litter, namely fast food purchased from the multitude of restaurants in the area, on the ground before boarding the bus. Given our observations, we believe that the absence of trash receptacles leads to an increase in litter. 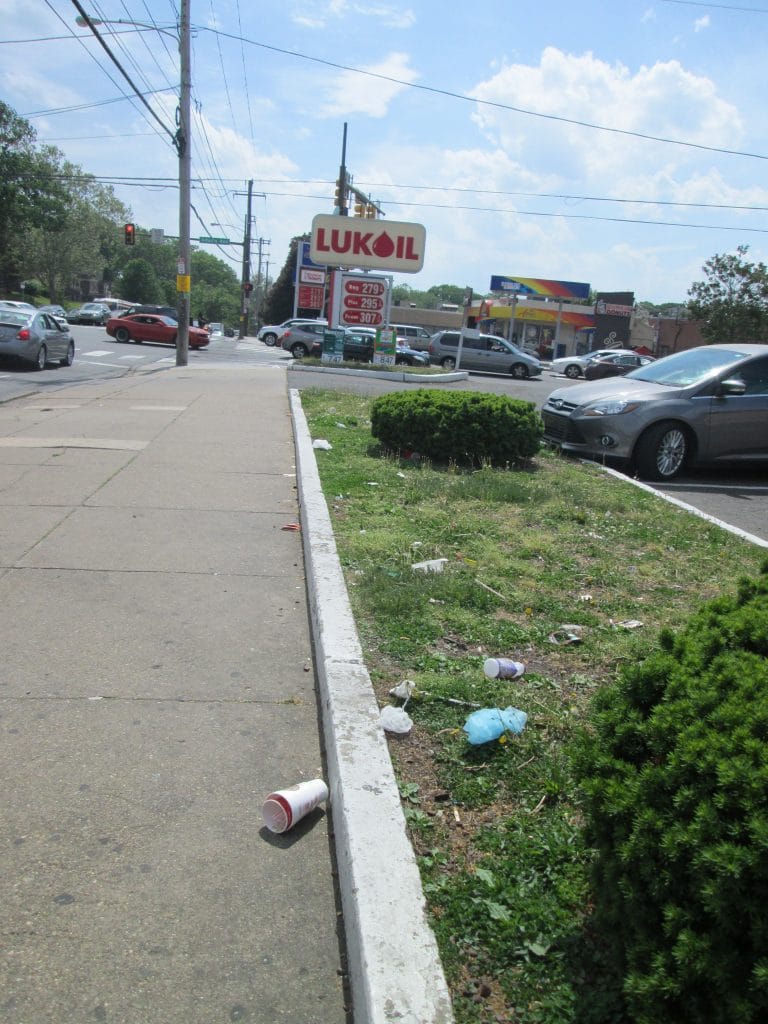 The adjacent corner of Rising Sun and Adams Avenue has recently confirmed our beliefs of the importance of trash receptacles. Next to the Route K bus stop sat a ‘Big Belly’ solar trash compactor. Since December 2013, we’ve observed significantly lower amounts of litter in the area compared to the Route 18 stop. The recent removal of the Big Belly from the bus stop led to an immediate increase in observed litter. As seen in the picture below, a large potted plant has been acting as a de facto trash receptacle in recent weeks. 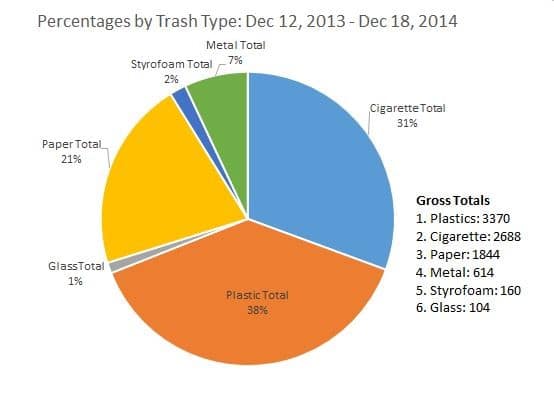 Data from our first year of observations

In addition to the inlet observation, our team conducts the Rapid Trash Assessment, or ‘RTA’. During inlet observations, our team observes 22 different areas in proximity to the commercial corridor, giving them a litter rating from 1 to 5. The addition of the RTA has given our team another metric to gauge litter levels across the entire T-04 outfall area. As seen in the picture below, we’ve observed that litter levels on the ground tend to correspond with litter levels in nearby inlets. 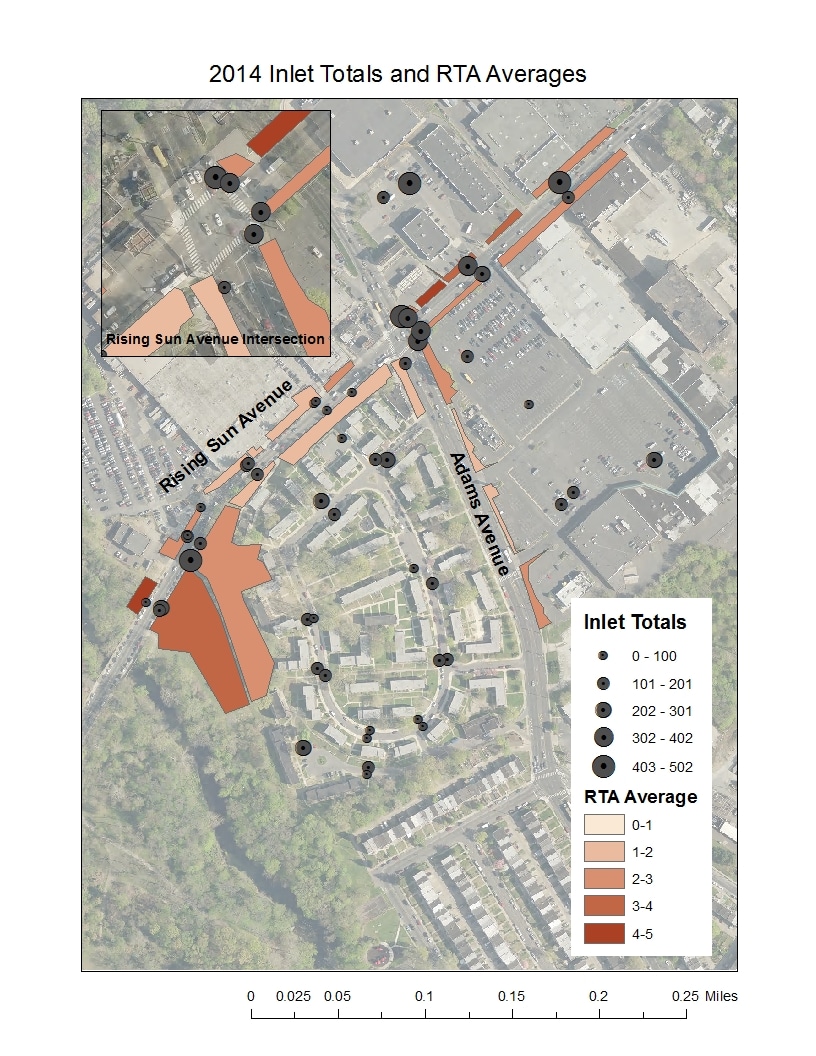 We are now developing the intervention phase of this study, which will consist of focused community and stakeholder education and engagement, as well as physical improvements in this area. We will meet with community organizations and stakeholders to discuss problem areas and impact, and collaboratively develop ways to address these issues. We look forward to working with the Pennsylvania Environmental Council, our newest project partner.

We’re so pleased that one of the outcomes of the Trash Task Force has been increased cleaning by the Streets Department around watershed parks. If you’d like to learn more about how you can make a difference in this neighborhood and watershed, contact Robin@ttfwatershed.org.