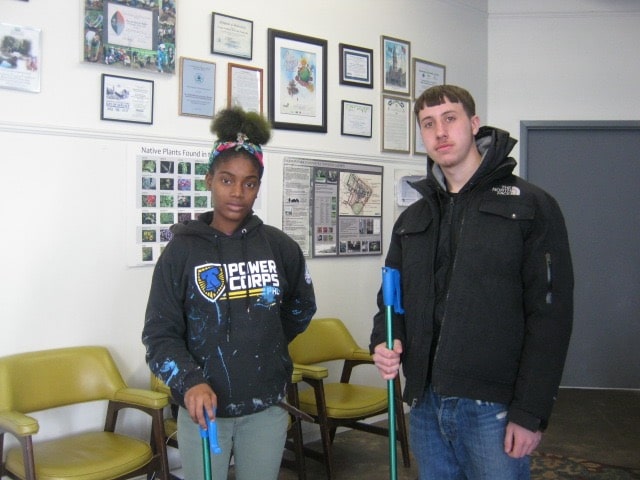 My name is Kristina Robinson, and I got involved as a Trail Ambassador for TTF through PowerCorpsPHL, a workforce development program for young adults between 18-24. In PowerCorpsPHL, I was assigned the Safety Coordinator role on my crew. While restoring parks, schools, and neighborhoods, I was in charge of keeping my crew safe. I did walk-throughs onsite to check for any safety hazards, was in charge of bandaging up injured crew members and documenting injuries, and made sure members were handling tools safely and responsibly. These responsibilities relate to my role at TTF as a Trail Ambassador because our duties include keeping the people of the park safe while they are enjoying the park, while also ensuring that people respect the park and its wildlife.  Additionally, I have experience in restoring large areas so taking care of the trees, animals, and trails is second nature to me. While at TTF,  I hope to keep Tacony Creek Park clean and inviting. I’m happy to be involved with TTF because I really love any kind of organization that is trying to make a difference in our community whether it’s through the environment or through the youth.

Hi, my name is Carlos Gonzalez, and I am one of TTF’s new Trail Ambassadors. A few things about me: I enjoy working out and riding my bike around the neighborhood. My favorite hobby is football and my goal is to become a explorer and travel around the world. I got involved as a Trail Ambassador for TTF through PowerCorpsPHL. PowerCorpsPHL taught me many things about taking care of the environment, such as collecting data and picking up trash and debris. I first met Robin from TTF during a tour of Tacony Creek Park through PowerCorpsPHL. During the tour, I learned new things about nature and the environment, such as different bird species and where the birds migrate from. The thing I like about TTF and working as a Trail Ambassador is helping out within the community and making sure no one abuses the environment by keeping an eye out for dumping, and making sure people don’t ride their dirt bikes on the trail.