Here at TTF, we know that clean, green parks and trails in our neighborhoods provide important spaces for neighbors of all ages. Fresh air, trees, and the sound of a creek make people feel calmer and connected to the natural world.

That’s why we were excited to see this article about a study that greening of vacant lots helps to reduce violent crime as well as to help people feel safer and go outside more. We believe that these findings bolster our community engagement, stewardship, and program efforts in Tacony Creek Park. 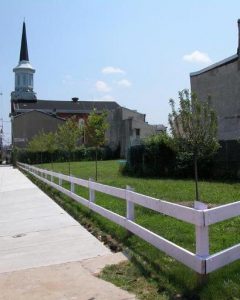 A new academic study highlights the deep impact that the work of the Pennsylvania Horticultural Society’s LandCare program has on reducing violent crime in Philadelphia communities.

The study was conducted by Charles C. Branas, chair of the epidemiology department at Columbia University’s Mailman School of Public Health and colleagues, along with researchers at the University of Pennsylvania, on the effects of greening vacant lots on violent crime, published February 26 in the Proceedings of the National Academy of Sciences. It highlights the impact that the work of the PHS LandCare program has on Philadelphia communities.

Branas and his colleagues had previously explored the potential of green space as a crime-prevention tool in a 2011 study. The new study took a more thorough, scientific approach to exploring the impact of greening on crime rates on 541 vacant lots across the city. The lots were randomly sampled and then randomly assigned to receive one of three treatments from the PHS: a full-scale makeover with grading, planting, and fencing; a basic intervention of clearing and mowing; or no invention at all.

According to the new study, “The main intervention involved the cleaning and greening of vacant lots across the city by removing trash and debris, grading the land, planting new grass using a hydroseeding method that can quickly cover large areas of land, planting a small number of trees to create a park-like setting, installing low wooden perimeter fences, and then regularly maintaining the newly treated lot throughout the post-intervention period.”

Findings from police reports and nearby residents during the three-year study (18 months before and after treatment) found that both full and basic cleaning and greening interventions significantly reduced violent crime by as much as 30 percent.  Additionally, there was a 58% reduction in people’s fear of going outside due to safety concerns and a 76% increase in their use of outside spaces.

According to the study, “Urban context matters in terms of human behavior. A contagion of problems can spread from blighted, dilapidated, and trash-strewn spaces to other nearby spaces, possibly leading to violence and crime.”

PHS LandCare work is now a model of urban revitalization for cities across the U.S. and abroad. PHS uses horticulture and green tools to address other societal challenges, including food insecurity and environmental pollution.

Philly.com and Science magazine both wrote about the findings of the study this week.