TTF is partnering with Ambrose Liu of the Olney Culture Lab and Dr. Matthew Smalarz of Manor College to record in-person interviews with community members as part of a two-year Tacony Creek Park Stories project. Manor College, which sits along the Jenkintown Creek at the headwaters of the TTF watershed, is developing an Oral History repository.

Tacony Creek Park Stories is a two-part effort collecting and sharing park and neighborhood history and memories, and then working with local artists to bring these stories to life, making the collective story of Tacony Creek Park more accessible to the community. As part of this project, TTF is proud to share this blog based on a November 2018 interview with Tom and Savannah McHale, residents of an historic Whitaker mill home bordering Tacony Creek Park.

Tom McHale’s family has lived near Tacony Creek Park since the 1960s, and in 1991 purchased an historic home once owned by the Whitaker family. The Whitakers had a family-owned wool mill on Tacony Creek in the early 1800s that operated until the 1970s. By 1813, a series of homes were completed adjacent to the mill to be utilized by the Whitakers’ workers, visitors, and family members. While many of these homes fell victim to arson in 1975 and thus were knocked down, the McHales were able to purchase an intact home, which had been a long-time dream for Tom’s mother. 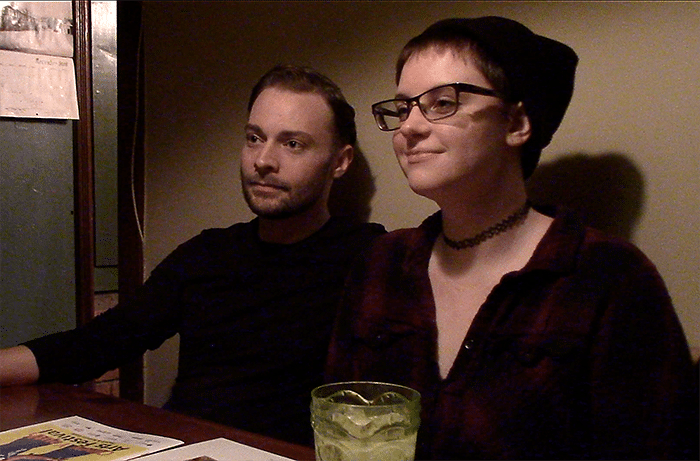 Some of Tom’s favorite memories would come from living in the home and its proximity to Tacony Creek Park, such as taking his dog for walks and spending time with neighborhood friends. “We’d always be out there playing, and it always gave me an appreciation for the park and taking care of it,” says Tom. While Tom moved to Center City Philadelphia in his twenties, his love for the park and the community brought him back to the family home with his wife Savannah in Spring 2018.

The couple enjoy the history of the property so much, they held their marriage ceremony in the yard near the forest bordering Tacony Creek Park. “The park, you know, the house – there’s so much character. It’s just such an amazing place to be,” says Savannah.

During Tom’s departure from the neighborhood, he followed TTF on social media to see progress and programming taking place in Tacony Creek Park, and he also heard from his mother first-hand that the neighborhood was seeing improvements. Upon moving back to the area some ten years later, Tom says he sees more wildlife and plants than he ever remembers seeing as a child, and that the crime, car fires, and police chases through the area have greatly decreased.

Tom reflects on the changes by saying: “…I think it also keeps the creek cleaner by having these grasses grow. So seeing the new plants, grasses, how that is protecting the creek from pollutants, how it’s fostering wildlife, that many more gates were put up blocking access to  the ATVs and four-wheelers that can tear up the dirt and mud and scare away the animals, and all these community walks that have been hosted, have all been small examples over the last decade of progress that was not there when I was a kid, that’s great to see now.”

“When we moved in here, I got my camera back out and rediscovered my love for photography and started photographing all the wildlife in the park,” Savannah says. She spent last summer photographing hummingbirds, and continues to find inspiration from the wildlife, as currently she’s keeping an eye out for a fox that’s said to be roving the area.

Robin Irizarry, who works as TTF Philadelphia Watershed Coordinator, found Savannah’s nature photos on iNaturalist and invited her and Tom to attend park programs. “Meeting them and seeing the work that they’ve done and just how much he knows about the local wildlife and plants… that has really inspired me to get more involved,” says Savannah “…Just his passion for keeping the park clean… and just asking the community for ideas on how to get the rest of the community involved in the parks is really remarkable to me.”

The programming TTF offers is an opportunity to get people out and interested in the park so they become invested in the area and defend it, and that’s a big part of what Tom and Savannah love about the organization and what got them involved. Tom explains that the organization’s community walks, clean ups, and block parties are bringing the community together around a shared resource that provides common ground.

Tom’s hope for the future is that more people become interested in the park and that it becomes safer for everybody to enjoy. He adds: “And if kids or anyone can take a walk in the park and that somehow inspires them or informs them to care about conservation and to care about the environment and the world we live in in ways different from just the grind of our daily lives but the bigger picture, then that’s what I would hope is the purpose of the park.” Savannah’s outlook for the future of the park? “Less dirt bikes, more animals.”