We are proud to share this press release from Conservation Voters of PA. You can read the original post here.

We were proud to be a co-sponsor of this conversation on the American Jobs Plan with Rep. Brendan Boyle. 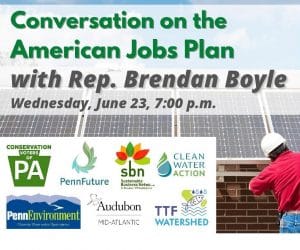 Boyle, speaking at an event hosted by Conservation Voters of Pennsylvania, the statewide political voice for the environment, and co-sponsored by PennFuture, PennEnvironment, and the Sustainable Business Network of Greater Philadelphia, noted that the president’s plan proposes solutions for two key threats facing our nation: economic inequality and climate change. The plan would create millions of good-paying union jobs, put the country on a pathway to 100% clean energy by 2035, and invest billions of dollars (40% of the total) in disadvantaged communities that have been hardest hit by COVID-19, economic inequality, and climate change.

“Tackling the threat posed by climate change is key to building back our economy in a way that puts millions of people to work in well-paying union jobs,” Boyle said. “We need to create pathways to the middle class for Philadelphians as we put millions of people to work modernizing the nation’s aging electrical grid, weatherizing homes, and building new solar and wind installations.”

The American Jobs Plan would allocate billions of dollars to clean energy projects, as well as an additional $165 billion to help Amtrak and local transit systems address generations of maintenance backlogs and expand service.

Much of this money would be targeted for Philadelphia, where SEPTA connects hundreds of thousands of riders every day to work, doctor’s appointments, and grocery shopping trips – and where a healthy transit system is necessary for essential workers, many of whom do not own cars. More than 70 percent of SEPTA riders are people of color.

“We are so proud to work with Congressman Boyle on getting this critical legislative proposal over the finish line in Congress,” said Conservation Voters of Pennsylvania Executive Director Josh McNeil. “Congressman Boyle is a champion for working families and will bring his passion for building a cleaner, more equitable economy to the negotiating table as he fights on behalf of his constituents to pass transformative legislation to help his district and his city.”

Boyle will play a key role in getting the president’s legislative proposal through Congress. He sits on the powerful House Ways and Means Committee, which has jurisdiction over government fiscal and tax policy.

This means that key provisions of the plan that provide tax credits for disaster resilience, electric vehicles, and clean energy must be approved by the Ways and Means Committee. 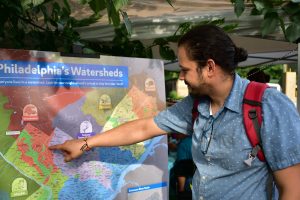 “Congressman Boyle’s leadership on these critical federal investments will benefit Pennsylvanians everywhere,” said PennFuture President and CEO Jacquelyn Bonomo. “The American Jobs Plan is plan with a vision, a vision for a more equitable, prosperous and sustainable economy; for safer communities resilient to climate change; and for state of the art infrastructure to carry us into the future. We need Pennsylvanians from every corner of the state reaching out to other members of Congress, and like Congressman Boyle, leading our state’s support for these once in many-generation investments that can transform our lives and livelihoods.”

President Biden, who has made tax fairness a hallmark of his domestic agenda, is pushing that key provisions of the American Jobs Plan be funded by rolling back portions of the Donald Trump’s tax cuts on large corporations and wealthy individuals.

The first pieces of the American Jobs Plan are currently being debated in Congress, and House Speaker Nancy Pelosi is pushing for final votes on the legislation over the summer and into early fall.

“We know that the American Jobs Plan will bring the kind of investments to our watershed communities that create good jobs, and address environmental injustice and climate change at the same time,” said Julie Slavet, Executive Director of the Tookany/Tacony-Frankford Watershed Partnership. “We appreciate the opportunity to work with this coalition and our friend Representative Boyle to share information and raise up the voices of our communities to support this critical initiative.”

“The American Jobs Plan is more than just a great job creator, it’s a vision for our environmental future that features efforts to replace 100 percent of lead service lines, capping orphan oil and gas wells and ending subsidies for the fossil fuel industry,” said Maurice Sampson, Eastern Pennsylvania Director at Clean Water Action. “We appreciate Congressman Boyle’s support and urge his 17 other colleagues to follow suit.” 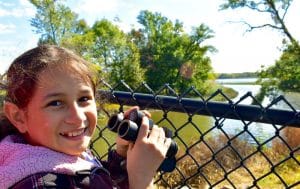 “We look forward to welcoming Rep. Boyle to discuss the American Jobs Plan,” said Beth Brown, Delaware River Watershed Program Director for Pennsylvania Audubon. “From cities like Philadelphia to small towns along the Kittatinny Ridge, birds throughout the Delaware River Watershed are telling us it’s time to re-imagine infrastructure and create a more resilient future for birds and people.”

“Building a clean, 21st century economy by investing in our nation’s crumbling infrastructure has been a bipartisan priority for years,” Boyle said. “The time has come to deliver on our promise to the American people by making major new investments that build out our middle class while putting us on a more sustainable path forward. I look forward to working with advocates, my constituents and my colleagues on passing legislation that helps cities like Philadelphia build back better by investing in the things that matter for our health, our families and our quality of life.”