Testimony for City Council Hearing on Issues Around Road Salting

These past few months, we’ve paid a lot of attention to the impact of road salt on our waterways. Working with partners, we have been successful at raising the profile of this critical issue with the media, elected officials, and citizens. We’re proud that Philadelphia City Councilman Isaiah Thomas, Chair of the Streets and Services Committee, reached out to us to share comments and that Geoffrey Selling, TTF Streamkeeper, testified at this hearing on our behalf.

Good afternoon Councilman Thomas and members of the Streets and Services Committee:

My name is Geoffrey Selling.  I live in the Mt. Airy section of Philadelphia and I am a retired science teacher from the Germantown Friends School.  In my retirement, I volunteer as a Master Watershed Steward with the Penn State Extension, as a Streamkeeper with TTF Watershed organization, as a weekly volunteer working to improve Rock Creek in Curtis Arboretum, and finally, as a volunteer chloride monitor with the Izaak Walton League’s Winter Salt Watch Program, which recently named my partner and myself Salt Monitors of the Month.

My testimony today is based on my roles as a watershed steward, a Streamkeeper, and a salt watch monitor.

How am I involved in salt monitoring?

Each month, my work partner, Chrissa Pedersen, and I test the waters in Rock Creek for salt levels.  We have done this for several years.  Initially, we tested the levels in winter, but when they didn’t go down last year, we continued to test monthly right through the seasons, only to discover that the chloride levels in Rock Creek were and still are shockingly high in both winter AND summer.  Some of the salt tests we performed actually exceeded the highest levels on our charts and now require special testing protocols.  So much salt is being dumped on roads, sidewalks, and parking lots and when it rains, all that extra salt flows down into our area creeks. We also learned that other salt monitors in the Delaware Valley on other creeks were finding the same thing as we had:  that the salt levels were so high that salt was actually getting into our groundwater and keeping the chloride levels in our creeks high year-round.

Why do I care so much about salty streams?

At times, our area streams are as salty as the ocean. In the winter, salt levels in the creeks we monitor are 50—100 times higher than normal.  In the summer, they are 10-30 times higher than a normal healthy stream.  In the watershed through which Rock Creek flows, municipalities spread c. 220,000 pounds of salt annually.  Much of it ends up in creeks when the snow and ice melt, and then rains wash the residue of salt off the roads.

Salty streams harm wildlife and riparian plants that cannot survive in chloride-laced water. These elevated levels of chlorides affect things such as fish and amphibians that rely on our creeks as well as aquatic insects known as macroinvertebrates that live on the bottom of our creeks.  Macroinvertebrates are juvenile insects that provide food for fish and when they hatch out as adults, are a major source of food for our area bird populations, including our beloved songbirds like robins, warblers, finches, etc.

Salt is not removed in our city drinking water treatment plants. Since our area creeks all end up in the Schuylkill and Delaware Rivers and those rivers supply our drinking water, this means that our citizens are drinking and using water high in chlorides, which is a major factor in high blood pressure and heart disease.  Elevated chloride levels can affect people who have health concerns related to salt intake.

Additionally, salt is corrosive to pipes, faucets, sinks, and appliances in both businesses and homes, causing enormous damage that takes place slowly and insidiously.  Roads, bridges, and cars are all affected by this heavy salting and we ALL pay for the repairs.

Most of our area creeks are impaired, some seriously.  Salt is one of the major impairments.

Where is all this salt coming from?

There are four primary sources.

I would be remiss if I didn’t mention the burgeoning perception among many Philadelphians and suburbanites that even with heavy snows, our roads ought to be almost instantly passable, with our vehicles going at normal speeds.  If our streets aren’t instantly plowed and heavily salted, many citizens grumble that the Streets Department is incompetent and our tax dollars are being wasted.  A citywide education program is needed to help our citizens understand the impact of that perception and how the increasing pressure on city and suburban officials to salt, salt, and salt some more is harming our streams, our wildlife, our health, and our infrastructure.

Thank you for holding this hearing and I invite and urge you to review the photographs in my written testimony, as submitted.

Photographs of Salt Spills and Over-salting of Parking Lots 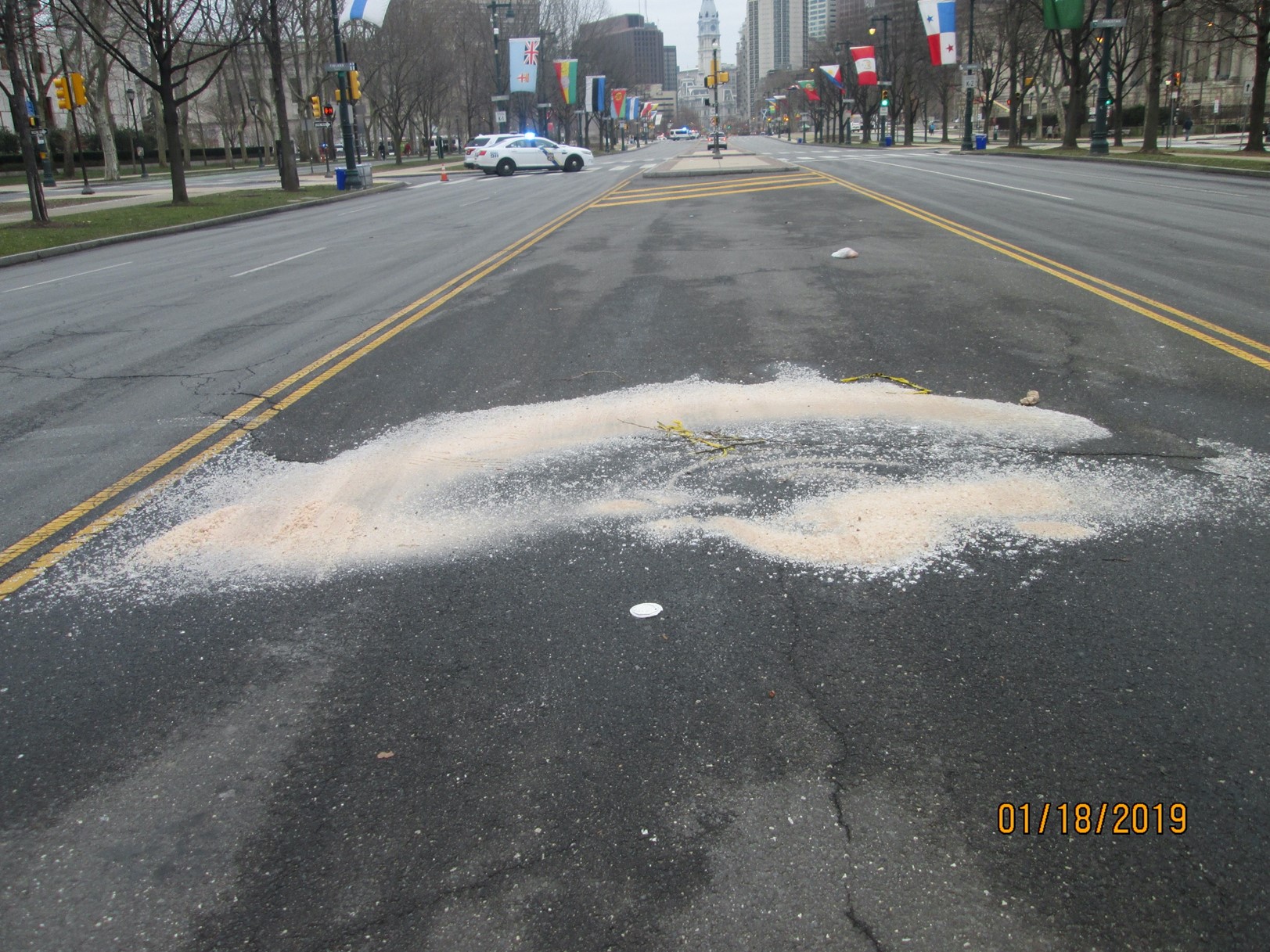 I took the above photo on the Ben Franklin Parkway in 2019. The snow had long since melted but this massive spill remained.

These two pictures were taken in Mt. Airy on Ardleigh Ave, after a minor snowfall in 2019.  The Streets Dept’s. heavy over-application and the spills did not improve safety but did harm area waterways. 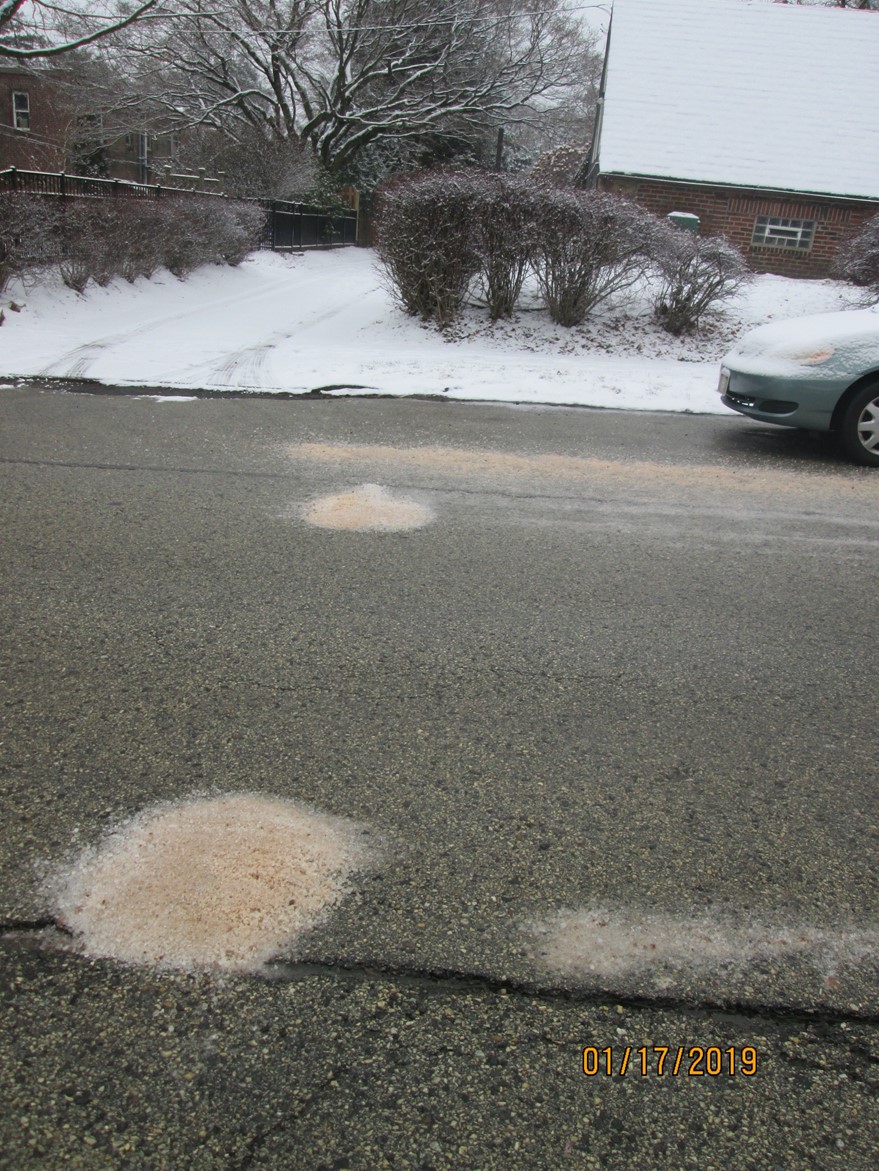 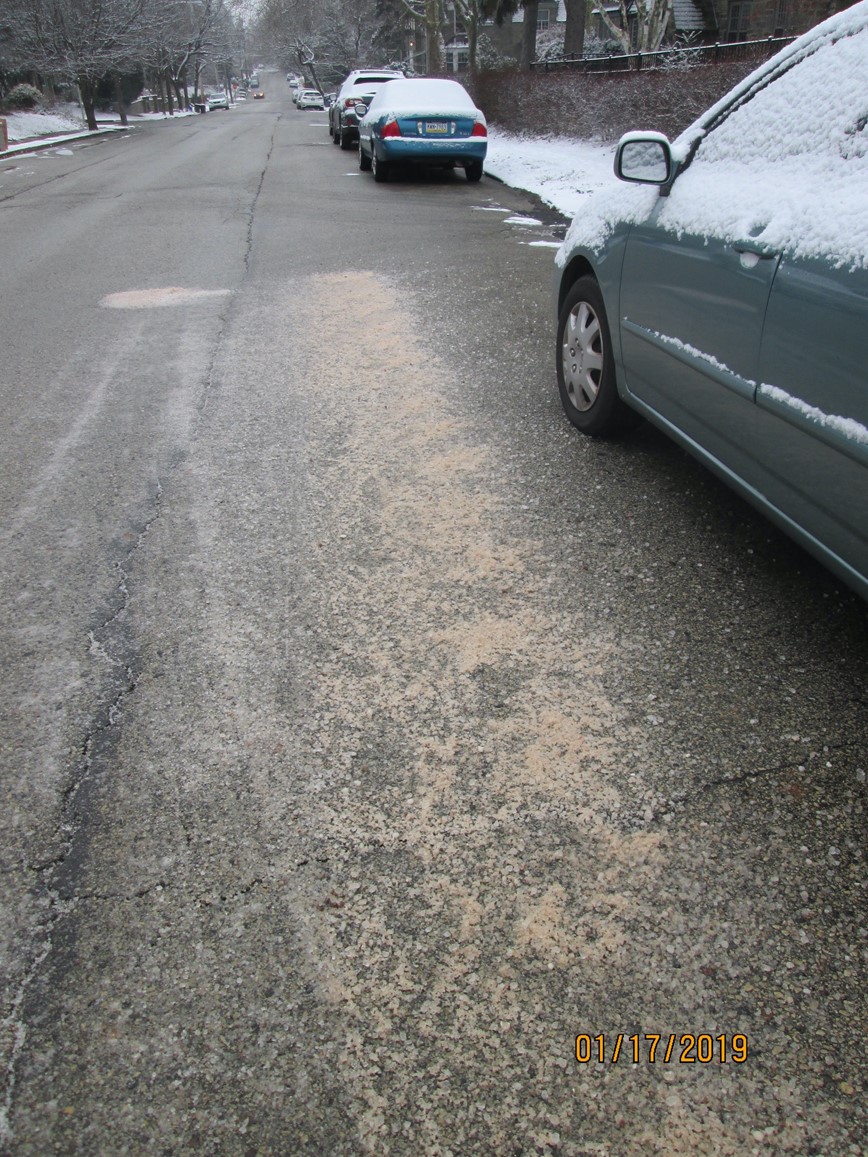 The following four pictures were taken on a three-block stretch of Ardleigh Avenue in Mt. Airy one week after a modest snowfall in January of 2022.

A spill near Washington Ln. 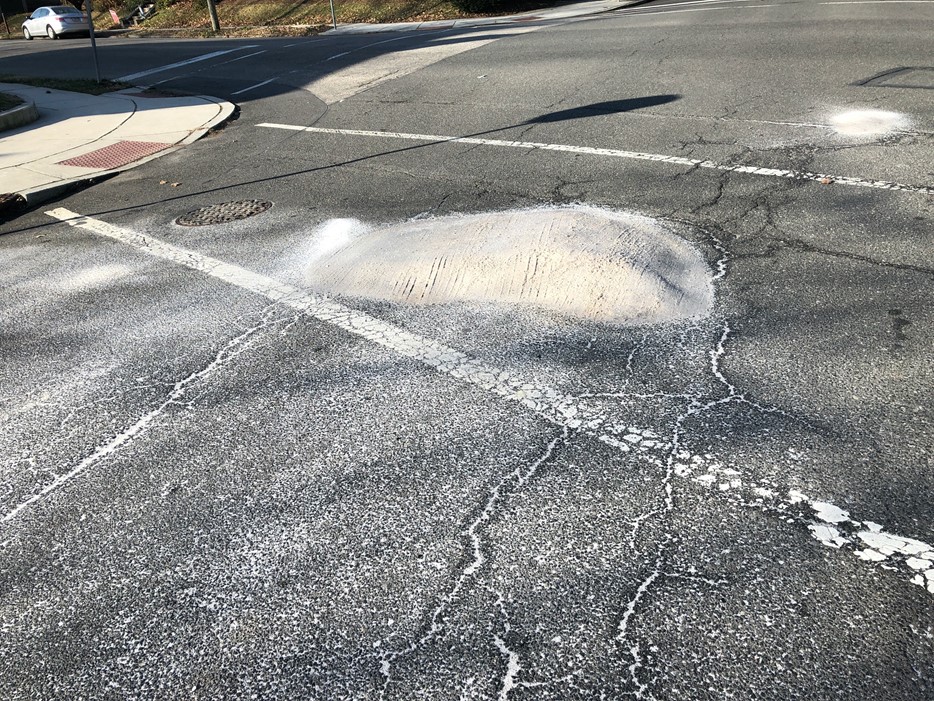 Another large spill, this time at Ardleigh and Vernon Rd. 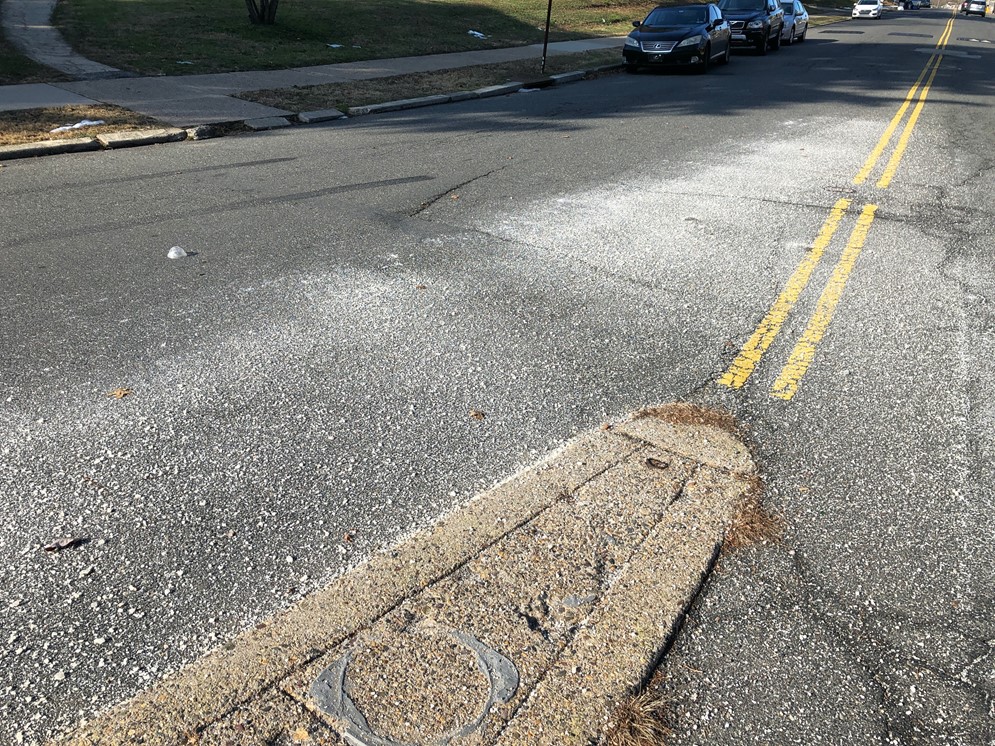 Excessively heavy salting near Vernon Rd. on Ardleigh Avenue. This picture shows how much extra salt was deployed that was not really needed. 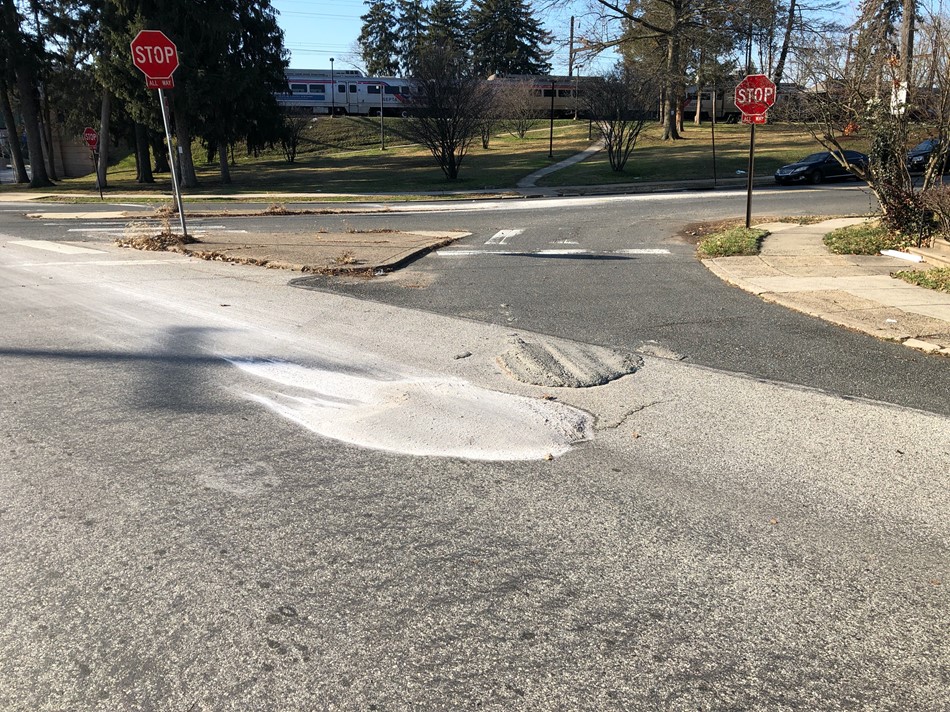 This large salt spill not only contaminated area waterways, but nearly caused accidents as cars swerved–trying to avoid it. 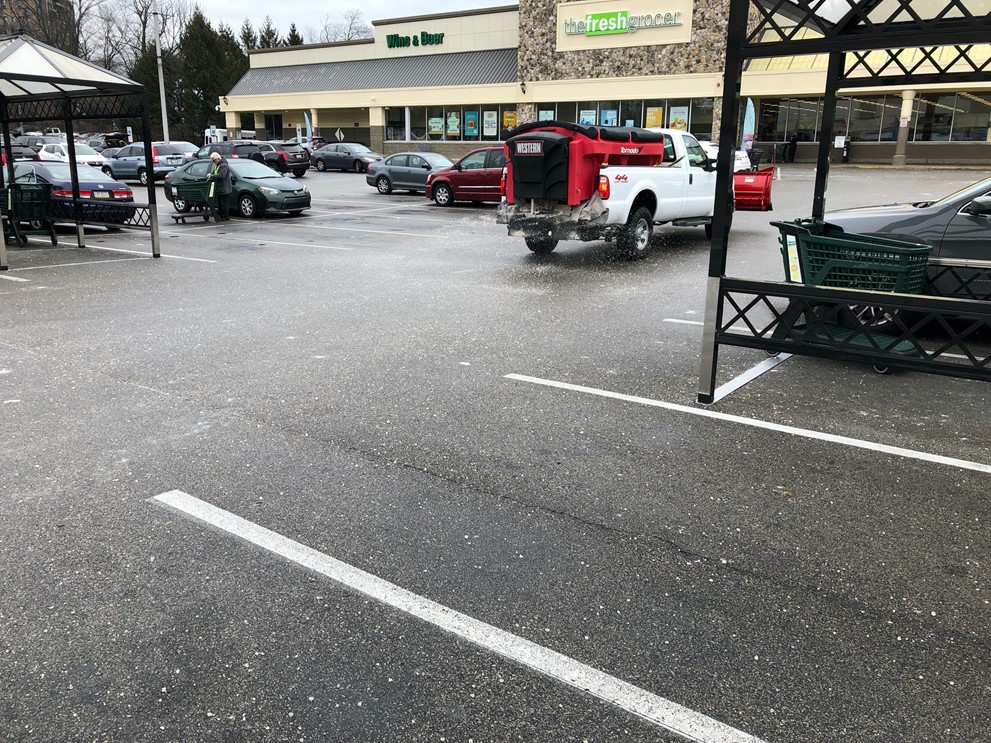 This salt contractor was heavily salting a parking lot, in anticipation of a snowstorm that never materialized.  The storm drains in this parking lot lead directly to the HEADWATERS of Rock Creek, which drains into the Tacony Creek, then into Frankford Creek, then into the Delaware River, upstream from a drinking water intake.  At the end of each lane, the truck stopped to let traffic pass, while the snow distribution wheel continued to pour salt onto the parking lot. 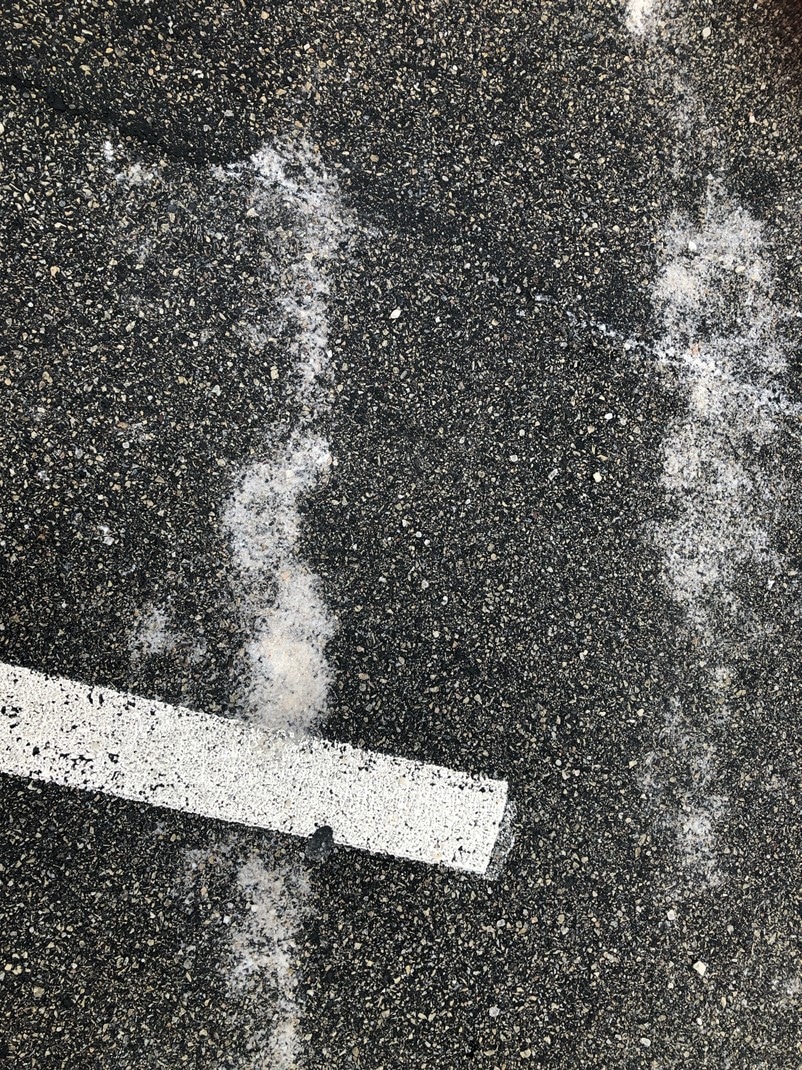 These examples of over-salting parking lots were noted all over the entire parking lot system, that included a Walmart, a Fresh Grocer, a large credit union, and several dozen smaller establishments, that are situated on three different levels at the corner of Easton Rd. and Cheltenham Avenue.  All of this salt ends up in Rock Creek, and eventually in our Philadelphia drinking water. 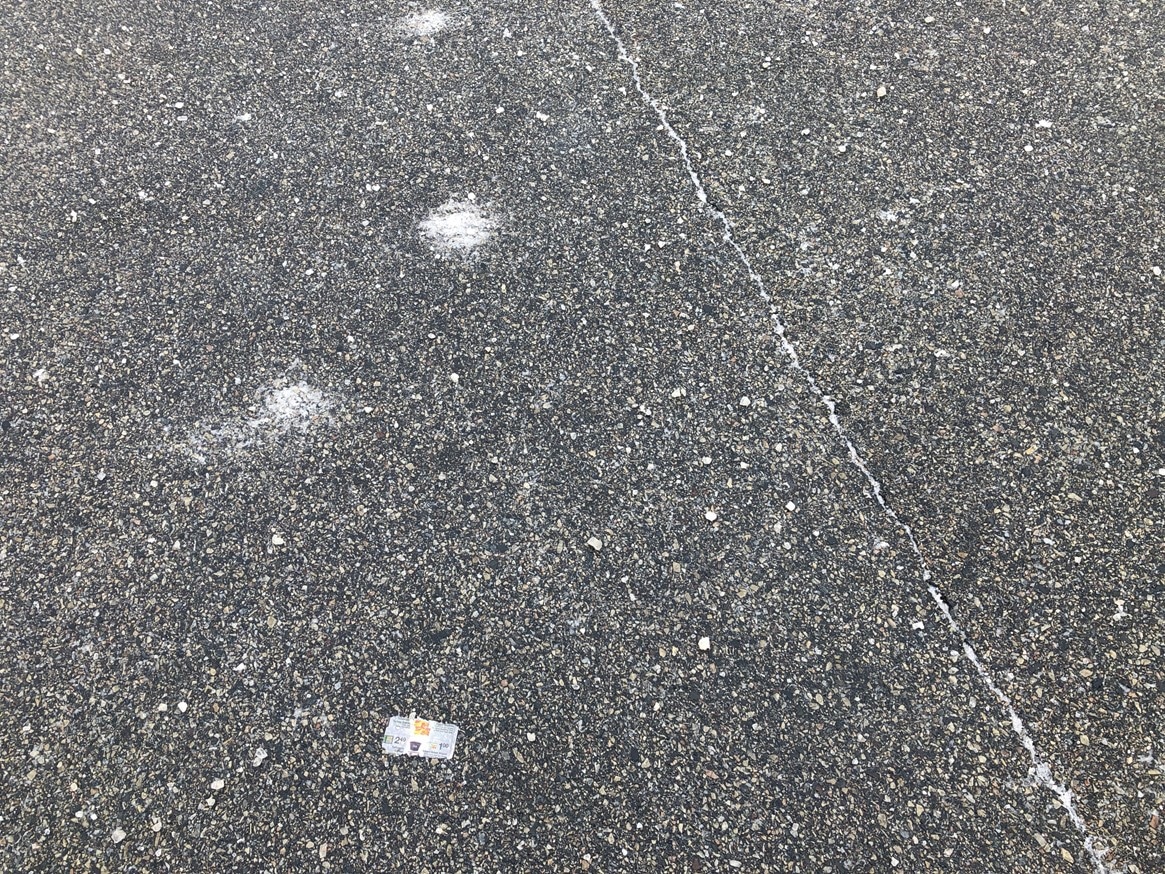 For information about Road Salt and how you and your community can use less: please feel free to share this Save Our Streams from Road Salt factsheet with your neighbors, shopping areas, and elected officials.

Want to get more involved? Have questions? Contact Ryan@ttfwatershed.org.

We would like to thank Councilman Isaiah Thomas and our partners at Stroud Water Research Center and Izaak Walton League. Lastly, thank you to our dedicated volunteers who monitor the salt levels of our watershed.