On a foggy mid-February morning, eight Outward Bound Philadelphia instructors and a representative from the Schuylkill Headwaters Association set out on a five day urban backpacking expedition. The purpose of the trip was to train the instructors on a new course that Outward Bound Philadelphia will be using this spring and fall on a system of trails in and around the city.

Known as “The Circuit”, this is the regional trail system that will eventually connect 750 miles of trail and connect neighborhoods, jobs, and schools all over the city with paved walkways.

(Note from TTF: The Tacony Creek trail was funded through the Regional Trail Fund and TTF supports The Circuit Campaign to secure $10 million for trail planning, design and construction. TTF has hosted community meetings about The Circuit in both Philadelphia and Cheltenham and met with Montgomery County Commissioner Leslie Richards, who sits on the Board of the Delaware Valley Regional Planning Commission (DVRPC), to ask for her leadership in approving an allocation of $10 million to the Region Trail Fund to keep building out The Circuit. Both Cheltenham Township and Jenkintown Borough, two of the governing Boards of TTF’s partnership municipalities, adopted resolutions supporting Circuit funding.) 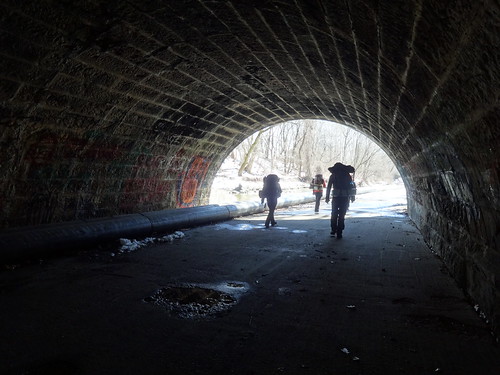 The group hiked and bussed all over the city to stay on The Circuit. On the first day, we hiked from Lemon Hill in Fairmount Park up The Schuylkill River Trail to The Wissahickon Park Trail just outside of Manyunk. There we entered Wissahickon Park and hiked along a snow covered Forbidden Drive to our campsite in Roxborough.

On the second day, the group bussed to the section of Tacony Creek Park in Juniata where we met with TTF Education &  Outreach Director Alix Howard. She spoke with the crew about the problems that the Tacony Creek (which empties into the Delaware River) faces from pollution and storm-water run-off. Alix also shared information about possible service projects for future Outward Bound students, including mussel surveying and storm drain marking in the neighborhoods around the Park.

Jason Sandman from The Scattergood Foundation also joined us, and telling us about management of portions of the land around Tacony Creek and sharing many ideas about how to involve local youth. He joined the crew as we pulled over 20 tires and various other pieces of trash out of a tributary that empties into Tacony Creek.

On Day 3, after a relaxing night on the banks of Tacony Creek, the crew left the serenity of the park and re-entered the excitement and sensory overload of city life. A few SEPTA transfers brought us back to the Outward Bound base just north of the Art Museum. From there the instructors explored Center City and Chinatown on foot, while experiencing some of the same activities that our students experience. That night, the Philadelphia Zoo opened their doors for a late night tour and gave us a well appreciated floor space with heat where we slept.

With so many new experiences and so much new information to process, the group spent the morning of day four back in the office working hard to create routes and curriculum for upcoming Circuit Expeditions. In the afternoon, we drove to Penn’s Landing and explored Old City while taking part in activities and games that focused on helping future students reflect on the complexities of urban living. The campsite for the night was Bartram’s Garden, on the banks of the Schuylkill in South Philly.

After changing settings throughout the week, from city streets to wooded river sides, the view of the city from Bartram’s Garden put the whole course into perspective. All of the people, places, and organizations the group encountered were contained within the city limits. Places that no one would think could exist in an urban metropolis, like Tacony Creek Park, Wissahickon Park, and Bartram’s Garden, are woven into the very familiar sights of Route I-95, City Hall, and the Comcast Building. With the Circuit’s trail system gaining mileage everyday, there is growing opportunity to get out and enjoy, as well as steward, these places in our city!