Did you know that the Philadelphia Streets Department has started an increased effort to sweep up litter along your watershed park? This new monthly street cleaning is part of a coordinated approach among City departments to keep our city’s watershed parks, trails, and creeks as clean as possible.

Along Tacony Creek Park, this increased cleaning takes place on streets directly adjacent to the park in Feltonville, Juniata Park, Lawncrest, Olney, and along Cheltenham Avenue in West and East Oak Lane.  Sweepings are scheduled for the first Friday of each month. 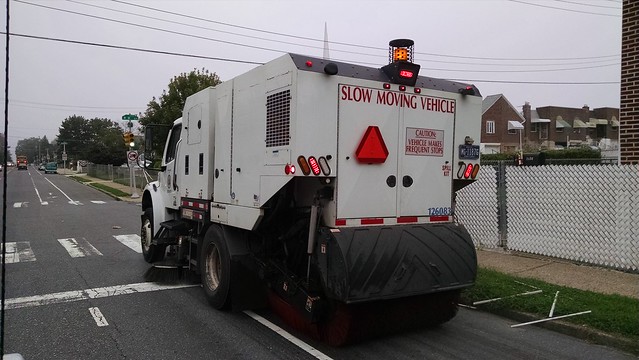 In early September, TTF staff followed along with the Streets Department as the street sweeping crew worked their way along the roads next to Tacony Creek Park. This run marked the fourth time the crews have swept along these new watershed routes.

TTF and our partners wanted to identify which areas of the route were tough: what are the hard-to -reach areas that accumulate lots of trash that would benefit from additional attention and community engagement?

We met up with George Mansfield, the Streets Department crew manager and followed the sweeper truck in action.  Due to wind and traffic, most of the trash accumulates in the curb, so the sweepers follow it closely, swinging out to pass the occasional parked car.  The rolling brushes of the sweeper catch the litter from along the curb, loading it up into the truck.  When the hopper is full, the trucks have to make a run to a facility in the northeast to dump the material. 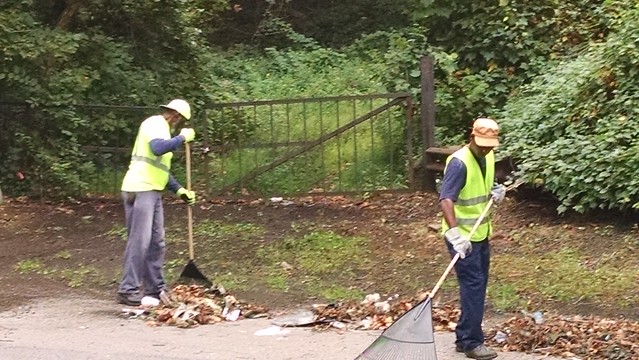 Trash in the curb is a big problem, as it very often ends up washing down into the storm drains.  In our combined sewer overflow (CSO) system, rain water entering the storm drains washes into the city sewer lines, picking up trash and pollutants along the way.  A lot of the trash gets through inlets. The combined rain, sewage and trash overflow directly into the creek.  Sweeping along the curbs is one way to prevent as much trash as possible from ending up in the creek. 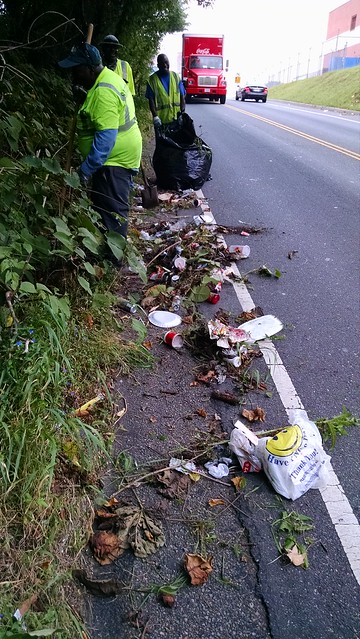 The Streets Department also has a crew on foot in certain areas.  Known as the ‘Dirt Gang’, this crew rakes, sweeps and collects trash in particularly bad spots.  We wacthed the Dirt Gang cleaning up along Adams Avenue, just above the bridge over Tacony Creek, and below the railway overpass.

This narrow road is right below a busy shopping area. Trash collects here, getting trapped in the brush and vegetation along the road.  Crew members worked to rid the corridor of trash, leaving behind a much cleaner Adams Avenue.

While the city is increasing efforts to routinely clean up throughout the watershed, it is even more important for all of us to step up our efforts to make a real difference.

Here are some ways you can help:

Don’t litter! Pick up after yourself! It’s your neighborhood, park, trail, and creek. Fish belong in our creeks, not plastic bottles and potato chip bags.

Report short dumping as soon as you see it.  Dial 311 to report illegal dumping or download the Philly 311 app on your smart phone.

Don’t put household bags of garbage into public, street side trash receptacles.  This overloads the cans before the trash can be picked up, allowing trash to fall into the street.

Don’t sweep garbage down storm drains.  This blocks them up and sends garbage into the creek.

See what our friends at  Philadelphia More Beautiful Campaign are working towards.