Update to Blog: What IS that black pipe in Cheltenham? Sewer Replacement Project Has Begun!

This past summer, Cheltenham Township began a 12-month project to replace nearly four miles of its public sanitary sewer system, called Interceptor A, between Old York Road and Central Avenue. In addition to inspecting laterals, this reconstruction is critical to protecting Tookany Creek, the health of our watershed, and the quality of the water that flows into the Delaware River.

We commend Cheltenham and wanted to take this opportunity to share this update and blog, which we developed to answer questions from the community about the black pipe and sewer replacement.

This extensive $8.5 million project is the Township’s second major initiative this year to tackle its aging sewer system, which is nearly 100 years old in sections. In January, the Township launched an eight-year effort to clean and inspect all of the sanitary sewer mains as well as the laterals that connect homes and businesses to the public sewer system.

Both efforts are designed to correct the problem of rain water and ground water entering the sanitary sewer system, known as inflow and infiltration (I/I). During and after major rain events, cracks or breaks in the sanitary sewer main and laterals allow excess water into the system, straining its capacity, increasing treatment costs and potentially triggering sewer overflows that damage property and the environment. When completed, the interceptor replacement should eliminate a major portion of the I/I entering the Cheltenham sanitary sewer.

During the project, temporary road and park closures will be necessary in the active work zones. But once completed, the Township will be able to remove the temporary sewer bypass that currently serves as a backup to prevent sewer overflows.

Answers to the Question: What IS that black pipe in Cheltenham?  Blog originally posted on July 11, 2015

Cheltenham Township residents have gotten used to seeing the long black plastic pipe that runs along the Tookany Creek. It has been a community fixture since the summer of 2010. Many people have asked us about its purpose, and if and when it will be removed. 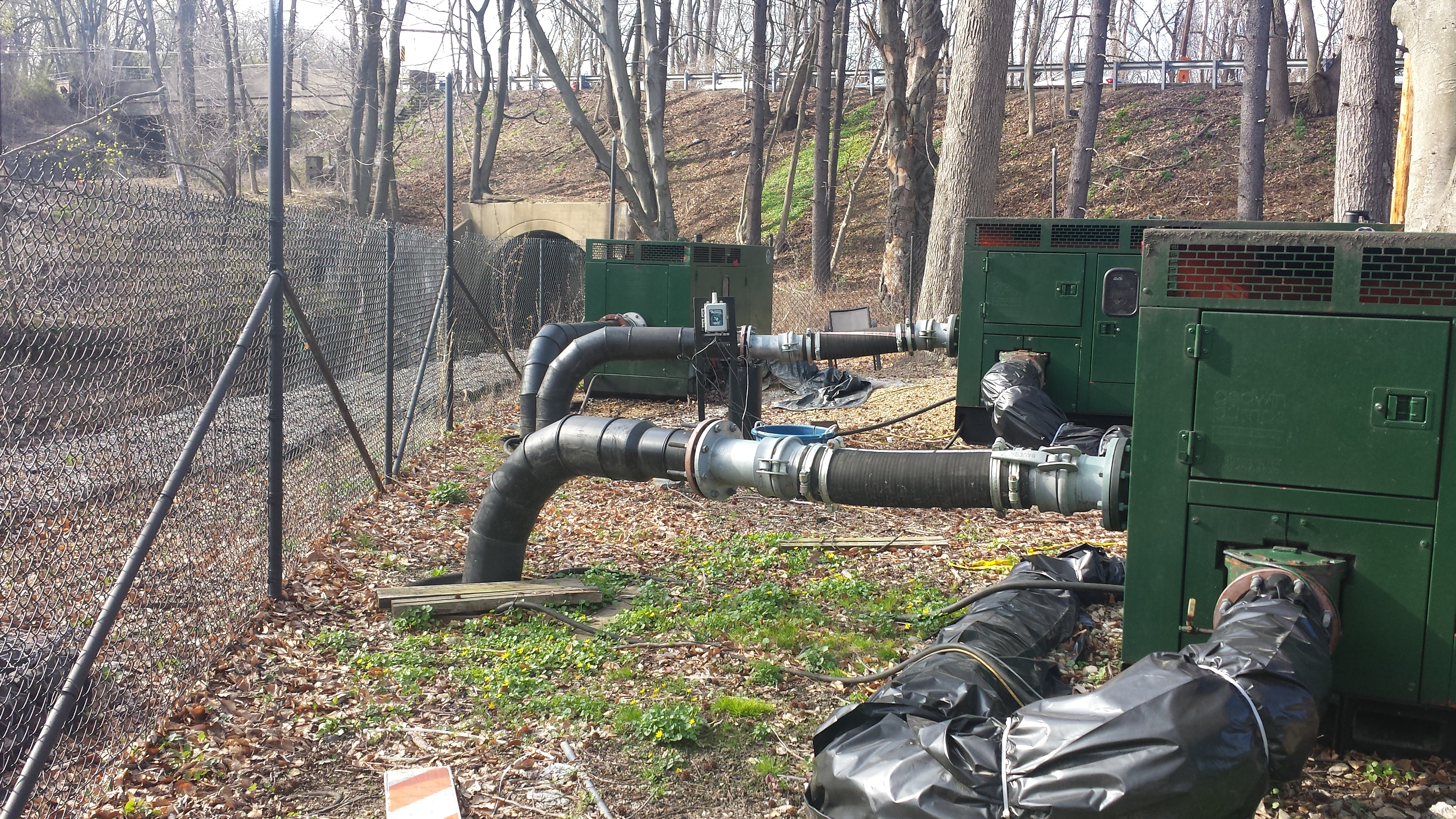 The pipe emerges from a hole in the ground at the back of Wall Park, just below the bridge where Church Road crosses the creek. Large pumps are attached to a section of pipe, and then the pipe turns and begins its journey along the creek. It runs through Wall Park, through Ogontz Field, across the creek from High School Park, around Gimbel Field, following the many rocky and wooded turns of the creek. Finally it enters Tookany Creek Park under the New Second Street Bridge, vaults up to the bank, and follows Tookany Creek Parkway to a parking lot next to Central Avenue. There it goes into a hole in the parking lot, surrounded by concrete Jersey barriers.

What is the purpose for this nearly 4-mile long pipe? In short, it is a bypass pipe designed to prevent sanitary sewer overflows during wet weather events.

In 2010, after several large tropical storm events led to sewer backups in parts of the Township, the Pennsylvania Department of Environmental Protection (DEP) required Cheltenham to construct this temporary bypass sewer system. The bypass system was built to address infiltration and inflow (“I & I”) until permanent sewer rehabilitation projects are completed.

I & I is caused by the infiltration of ground water through cracks in the sewer pipe and stormwater entering the system through cracks in manhole covers and other places where the seal is not tight (Inflow). During large storm events, the amount of water entering the sanitary sewer system may cause the system to overflow and leak sewage into the ground and eventually the creek. This I & I issue has become an increasing problem for the Township as the 90-year old sewer system ages. 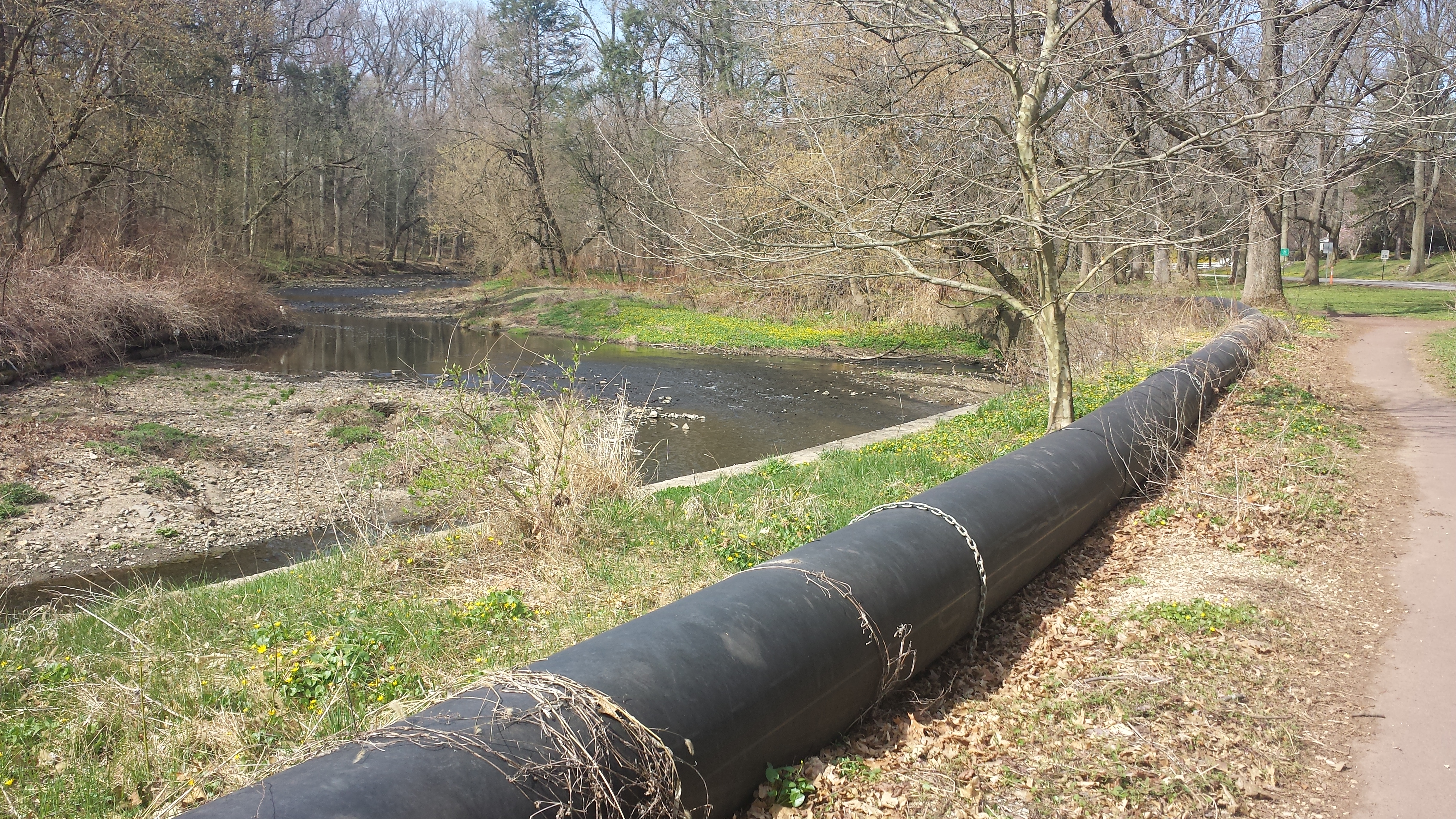 Cheltenham’s sewer system also carries about 1/3 of the sewage from Abington Township and most of Jenkintown’s sewage as it heads along the Tookany Creek into the City of Philadelphia and eventually to Philadelphia’s Northeast Wastewater Treatment Plant close to the Delaware River in Northeast Philadelphia.

The bypass system — pipe, pumps, and associated controls — operates as a relief system for the main sewer line. It will automatically pump any excess flow at a rapid rate through the 24″ polyethylene pipe from Wall Park through to the Central Avenue parking lot, where it flows back into the main sewer pipe. The old sewer line — from Central Avenue to the City of Philadelphia —  is larger at this point and can handle the excess polluted water.

Since 2010, Cheltenham Township has made extensive investments in reducing I & I. Evaluation of the system has determined that some sections of the pipe could be relined and repaired, while other sections need to be replaced. Cheltenham is in the midst of a multi-year relining, repair, and replacement program that will radically minimize I & I. To date, the sewer line from Rices Mill Road to Old York Road has been completely relined, rather than replaced, to minimize disturbance to the system and the environment along this area of the line. 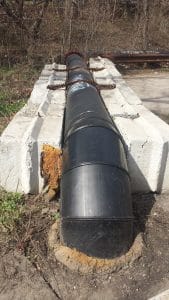 The next part of this project will involve the complete replacement of 3.75 miles of the main sewer line (the interceptor) from Old York Road to New Second Street. This replacement project is expected to be bid by early fall, and the Township plans to start the project in late fall, with completion by early 2017. It will involve extensive excavation, new creek crossings for pipes, and restoration of all the areas disturbed by the project. The bypass system will stay in operation until the sewer replacement project is complete.

We commend Cheltenham for undertaking this massive infrastructure project. Replacing aging infrastructure is a tremendous financial challenge for municipalities, but it is especially critical for protecting environmental assets such as the Tookany Creek. The completion of this effort will be a positive step forward for the health of our watershed.