After two years of observing 53 sewer inlets around the T-04 outfall, we have found that there is a correlation between precipitation and the amount of litter in these observed sewer inlets. The reduced litter totals after rain events show the potential of rain to transport litter from the ground and into the sewer system, as seen in the graphs below. In addition to the reduced litter totals, there has been a 12.5%  reduction in observable trash during the spring, when rain totals are highest.

Municipalities have attempted to address the problem of litter flowing into sewer inlets in several ways. A popular intervention technique is the installation of netting systems at outfall locations. Previously, the Philadelphia Water Department (PWD) installed a netting system at the T-04 outfall in an attempt to prevent litter from entering the watershed. Unfortunately, the vast majority of material collected by the netting system was organic material (leaves, grass, etc.), and the Philadelphia Water Department concluded that netting was too costly for the amount of litter collected.

The initial cost of installation for the netting system in 1997 was $28,000 with the average cost of replacement of $355.90 (including labor costs). PWD recommended the use of pontoon skimmers — boats which collect litter in larger waterways — for their ability to collect litter more efficiently. One pontoon skimmer collected 70,000 pounds of litter, while the T-04 outfall netting collected a few thousand pounds in 2007. 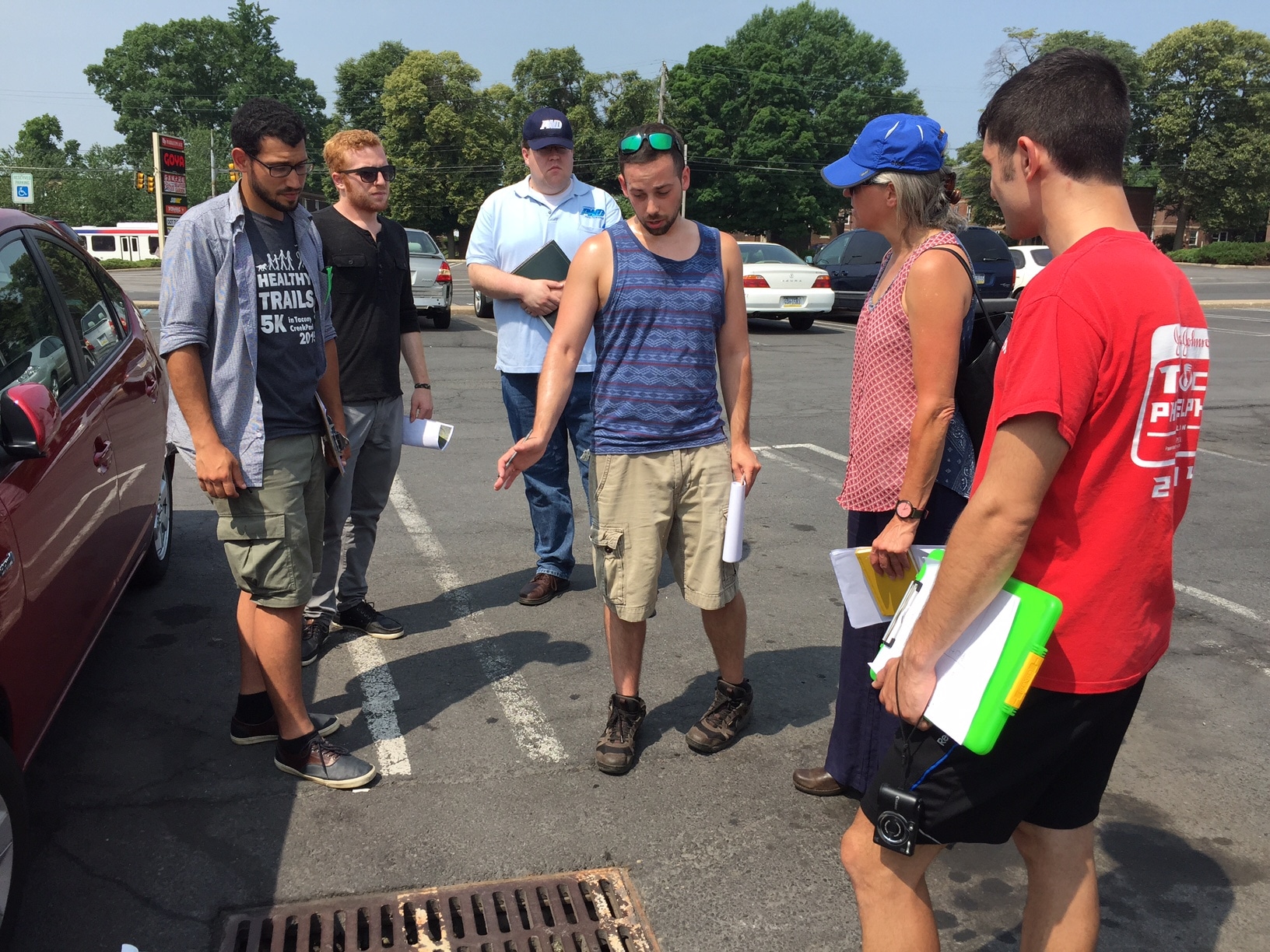 How do other cities and states handle trash?

Other municipalities who have installed netting systems have had similar issues with organic debris in netting systems and limited litter collection. Netting was monitored at four outfalls in the Tred Avon Watershed in Easton, Maryland. Conducted by the Center for Watershed Protection, this study found that approximately 4% of the solids collected by the netting were litter, with the remaining 96% of solids consisting of organic material.

We have found that higher temperatures lead to an increase in cigarette litter, paper products, and overall trash totals. This is likely attributed to the increase in foot traffic during nicer weather. New Jersey Litter Survey: 2004 found that approximately 50% of litter is ‘intentional’, meaning it is thrown away improperty in an intentional way. The survey recommended anti-litter campaigns as an effective method of altering negative litter behaviors, thus stopping litter at its primary source.

Keep America Beautiful states on their website that cigarettes make up 32% of litter that makes it into storm drains. Many smokers do not perceive cigarette butts as litter, so the message of Keep America Beautiful’s latest campaign is “Cigarettes = Litter”. In conjunction with KAB’s latest campaign, cities which implemented the campaign through KAB grants have been very successful in changing public perception and habits. Just this month, Hampton Roads, Virginia received a grant from Keep America Beautiful for a cigarette litter campaign. Hampton Roads installed several cigarette butt receptacles in strategic locations based on litter concentration, and gave local residents pocket ashtrays with information about the impact of cigarette butts on the local watershed.

Changes in anti-litter campaigns have been shown to have immediate effects on the levels of litter. Oklahoma implemented a “tough” slogan, named “Don’t lay that trash on Oklahoma”, which brought them to below-average litter rates across the state. After changing their slogan to “Keep Our Land Grand”, a 15% increase in litter was observed. They state that “paid advertising programs marketing the age groups identified [11-17 years of age most recommended] as primarily responsible for causing litter are the most cost effective. They prevent litter from occurring at a cost of $0.02 per item”. The majority of litter was found to be by people of ages 11-24, with a steep drop off after age 24.

Another important factor contributing to litter totals is the distance of the inlet to a bus stop. We’ve found that for every 100 feet from a bus stop, there is an average decrease of 21 cigarettes over the course of the survey in corresponding inlets. Other cities have attempted to address the problem of the spatial concentrations of litter around bus stops. Adding receptacles at highly trafficked bus stops is the primary way in which cities have addressed this issue. LA County’s Department of Public Welfare states on their website, “In an effort to reduce the amount of trash from our roads and to prevent it from getting into our storm drain which leads to the ocean, the County has installed trash bins at most bus stop locations (LA DPW)”.

In Bakersfield, California, residents have been complaining to the local bus service (GET) about the high presence of litter at bus stops. GET has responded by stating that trash can locations are determined by ridership from points, and not the amount of litter present at locations. TriMet, the public transportation of Portland, Oregon, has enacted the ‘Adopt-A-Stop’ program, in which local businesses can adopt adjacent bus stops. TriMet provides a trash can at the stop, and the business receives a plaque at the station for emptying the trash can and keeping the area litter free. 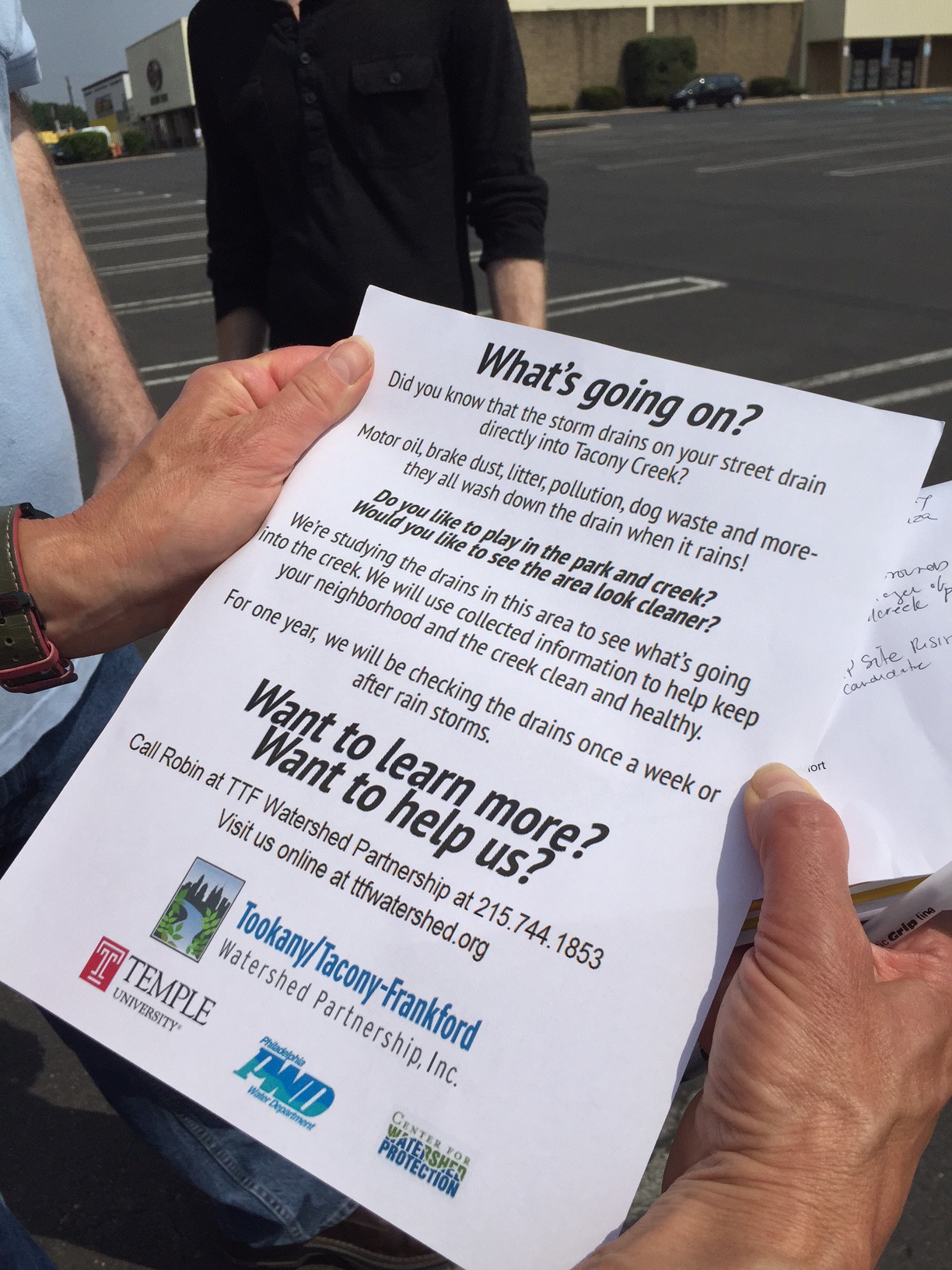 TTF established a Trash Task Force to address trash and illegal dumping in the creeks in our watershed in late 2012. The Task Force includes representatives of key municipal agencies and other organizations and is coordinated by TTF as part of our Outreach and Education efforts in Tacony Creek Park supported by the Philadelphia Water Department.

The Trash Task Force has met regularly over the past three years, and has convened three subcommittees: Education & Outreach, Monitoring, and Physical Prevention. TTF contracted with Temple University’s Department of Geography and Urban Studies to focus on a specific outfall area to identify the types of trash that accumulate in storm drain inlets over time. The goal of the project is to better understand the characteristics and sources of litter in relation to our watershed and to make recommendations for addressing litter throughout the Philadelphia region.

For more information about the Trash Task Force, contact Robin Irizarry at Robin @ttfwatershed.org or 215-744-1853.