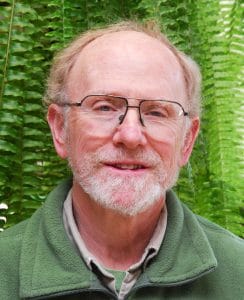 Just as the Tookany winds through Montgomery County, my journey to TTF was winding and indirect. Life is full of unexpected moments and chance meetings and I often reflect on how important some of these encounters have been. I’ve always been an outdoorsy sort: hiking, backpacking, camping and gardening but who would have guessed that watersheds would become a passion?

I began my teaching career in 1972 as a part time science teacher, but after just three years, I switched over to being a classroom teacher. For 21 years, I taught various combinations of third, fourth and fifth grade, first at the School in Rose Valley, and then at Germantown Friends School (GFS). I always included lots of science and outdoors time in my programs.  When the opportunity came to return to science teaching 19 years ago, I jumped at it and for the last 18 years of my career (I just retired in June of 2015), I taught elementary science at Germantown Friends School.

In building up the GFS’s science program, I emphasized outdoor activities and hands-on learning whenever possible. In the early 2000’s, I took my fifth grades to the Wissahickon Valley Watershed Association for a creek lesson with their education director, Judith Gratz (a favorite and ongoing volunteer with TTF!). Judith’s lesson was positively inspirational. The children tested the Wissahickon for various chemical pollutants, caught macroinvertebrates and then Judith pulled the whole thing together by putting the “bugs” under the microscope and showing the children “Bug TV” as she called it.

I loved this trip and wanted to know more. Moreover, I felt that a creek study was a huge topic — way too much for a morning field trip. I envisioned turning the experience from a trip into an entire three-month unit of study that would culminate in a similar trip. If the children could arrive at a creek knowing what the various pollutants were and where they came from, as well as how to test for them, I felt it would all make more sense… I also wanted them to become more astute observers of the physical characteristics of streams such as the color, smell, shadiness, turbidity (cloudiness) etc.  Finally, I admired Judith’s excellent macroinvertebrate identification skills, and I wanted the children to learn to do this work.

The next year, after a marvelous environmental education conference with a great stream workshop at Sandy Spring Friends School outside of Washington, DC and a weeklong training at the Stroud Water Research Center, I felt ready to embark on this. Eventually, the fourth grade year at Germantown Friends became an entire year of water study, entitled Living in Water. The children studied the chemistry of water, the water cycle, watersheds, the distribution of water on earth, estuaries, salmon and finally, the last three months of the year became the creek study, all of which expanded Judith’s incredible trip into a major unit of study.This culminated in a full morning trip to the Wissahickon.

As I worked on and developed the unit I began to meet more and more people involved in water stewardship and watershed education. I attended workshops, visited teachers already teaching this topic, went to exhibits and lectures and thus I managed to continue my watershed education. I returned several times to Stroud for additional trainings.

Eventually, as Living in Water crystalized in the curriculum, I wanted the children not to just be educated, but to become stewards of the environment themselves. About 12 years ago, working with Earth Force as a partner, I founded the Lower School Environmental Action Club, better known as EAC. This group of mostly fifth graders became very active in campus stewardship: planting bulbs, shrubs and trees, installing a rain garden, building and maintaining a pond, installing an outdoor classroom and taking care of the school’s flowerbeds and shrubs. EAC also established a composting system in which they composted the cafeteria and classroom lunch wastes. Each year the club put on an assembly both announcing what they’d accomplished and also educating their schoolmates about environmental issues. Each year, the EAC also participated in the Earth Force-sponsored multi-school celebration.

The EAC at Germantown Friends was one of the strong voices that helped to move the school in a more environmentally friendly direction. Each year, the 20 or so children conducted a fundraiser, earning between $6000 and $8000 to fund their own projects.

But when Earth Force fell on ‘hard times,’ they could no longer provide the EAC with a coordinator and this is when an AmeriCorps member with TTF, Ashley Schmid, appeared almost out of nowhere to help me. She was a lovely, warm, energetic and very strong young woman, whom my girl club members particularly adored and admired. It was through my conversations with Ashley that I learned about TTF. When the following year’s project came to a halt in the winter, Ashley suggested EAC could decorate some rain barrels for TTF, which would then be sold at auction at a TTF event at the Fairmount Waterworks. The children got very much into the designing and painting of the rain barrels and did an excellent job. All of them sold and I know at least one sold for $500. TTF gave the EAC its Watershed Youth Champion Award, further endearing me to TTF. The entire club attended the awards ceremony and I actually met some of the TTF staff, beyond Ashley.

Fast-forward a few years to my retirement and you can easily see why I wanted to continue working on watersheds. They’ve become my passion!  I knew I wanted to do some volunteer work in retirement and TTF was a natural place to turn. And they were just a short bike ride away from my Mt. Airy home, in Awbury Arboretum — except, WHOOOPS!  They’d moved to Frankford!! Still, I was fortunate to be welcomed by Julie Slavet, the executive director, who not only oriented me but steered me to my wonderful new ‘boss,’ Alex Cooper.

Under Alex’s guidance, I’ve participated in the quarterly stream monitoring, have become a Streamkeeper on Rock Creek, joined in the Ethel Jordan buffer planting and am helping out with all sorts of odds and ends: mending deer fences, organizing Streamkeeper data, and labeling equipment.  I never quite know what my Tuesdays at TTF will bring but I thoroughly enjoy the people, the work and the organization. I’m getting to help out at teacher workshops, at a maple sugaring event and will even lead a workshop on macroinverebrates. The journey to TTF was not direct but over the last 20 years, it almost seems like an inevitable destination. I’m glad to be here!