This article was originally posted here, on the PWD Watersheds Blog.

In 2016, Philly residents got to meet their watershed spirit animal as we rolled out new storm drain markers featuring a special aquatic critter for each of the city’s seven watersheds. 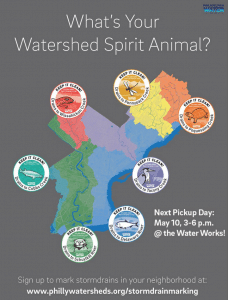 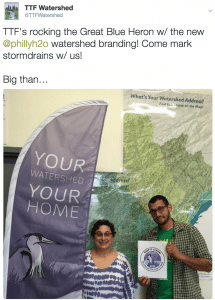 Volunteers have played an important role by signing up for our free marking kits and taking the time to install the new watershed markers at inlets all over the city.

Watershed groups like the Tookany-Tacony/Frankford Watershed Partnership have embraced their new mascots, and the Schuylkill River marker— featuring a river otter—even inspired a few stories in the local press. Local artist Louis Cook, who worked with PWD to create the markers, explains some of the thought process that went into selecting which species to feature on each of the seven watershed markers:

“Some of the animals are more common than others, but they are all native to Philadelphia and they all depend on clean water to survive. Some species, like the American shad on the Delaware markers and river otters on the Schuylkill markers, are already making a comeback thanks to water quality improvements in Philly’s rivers. You can catch a few shad here in the spring during their migration, and if you’re lucky, you might see an otter at the same time.

They are proof that watershed stewardship is working here, but there is still a long way to go. Some of the other species, like North America’s smallest (cutest?!) turtle, the bog turtle, and the prehistoric shortnose sturgeon could still use a helping hand.

It’s easy to forget when walking around your neighborhood, but keeping streets and storm drains clean can really be the difference that allows these creatures to recover.What better way to remind residents than to show them who is on the other end of the drain?”

Interested in seeing your watershed marker and ordering a few kits for your neighborhood? Head to our storm drain marking page!

In October, we joined West Philly neighbors and partners like Councilman Curtis Jones Jr. to cut the ribbon on our first official vacant land green infrastructure site—a rain garden in the Hestonville community.

The collaboration with the City’s Dept. of Public Property and Mural Arts also featured new amenities for neighbors and a stunning mural from local artists Eurhi Jones and Michael Reali. 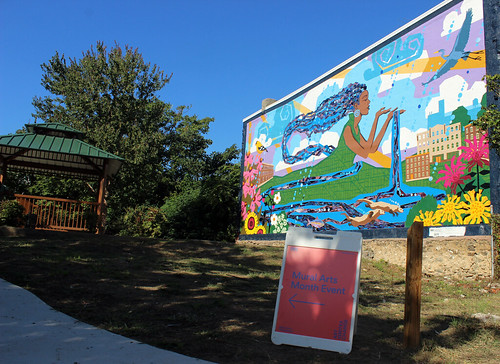 Read about the Hestonville rain garden and check out the art.

While an estimated 90 percent of homes in Philadelphia do not have a lead pipe connected to the City water main, we work hard to protect and empower those customers living in homes with lead service lines.

In 2016, we launched new efforts to help customers with lead plumbing and made it easier for people to replace lead service lines.

In addition to holding public forums and addressing City Council, we held community meetings in 11 neighborhoods to educate residents about water treatment and provided important information for those who do have pipes made from lead.

On our website, we introduced a new section that provides everything people need to know about the issue, from plumbing tips to getting drinking water tested.

We also expanded our Homeowner Emergency Loan Program (HELP) to offer interest-free loans for those interested in replacing service lines (the pipe running from the water main in street to a home’s water meter) that made from lead.

To encourage customers to take part in our 2017 upcoming in-home sampling program, we introduced a $50 water bill credit for participants: Learn about our new lead programs and taking part in the 2017 lead sampling program at www.phila.gov/water/lead

In a testament to the Schuylkill’s environmental rebirth, this annual trip—spanning the entire length of the river—saw its biggest turnout since the Sojourn’s launch in 1998.

Roughly 110 people were on the water each day, and a record 79 participants made the full 110-mile trip, which lasted from June 4 to June 10. On the final leg, 115 Sojourners made their way from West Conshohocken to Boathouse Row above Philadelphia’s Fairmount Dam.

The Watersheds Blog joined the canoes and kayaks for the Philly stretch of the trip, and you can check out an interview with a paddler that has been on every Sojourn.

The Return of WATER WOMAN

Back in the 1990s, the Philadelphia Water Department had a particularly fun way of connecting with kids to educate them about water issues: Water Woman.

A spandex and cape-wearing superhero of aqua, Water Woman (sometimes accompanied by Captain Sewer) would talk to Philly school students about staying healthy by staying hydrated and share tips for protecting our watersheds from litter and other threats.

When Maura Jarvis—at the time a Drexel co-op intern with the Public Affairs Unit—found out that the Water Woman getup not only still existed, but was sitting in a nearby closet, it didn’t take her long to suit up.

The transformation was remarkable, and Water Woman quickly became a hit at public events like the ribbon cutting for our new Kelly Drive/Schuylkill River Trail water stations, which got her on the evening news.

Jarvis, now working full-time with the Public Engagement Team at PWD, says she feels she was destined to revive Water Woman and notes she even has a remarkable resemblance to the comic book depiction of the super hero, seen here: 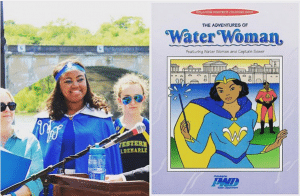 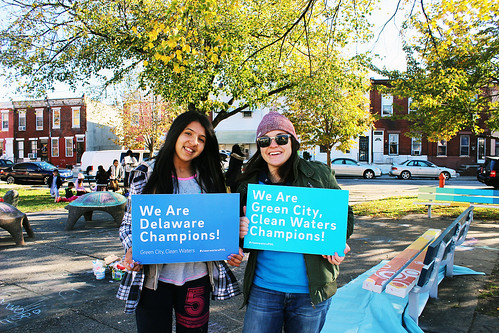 In July, AmeriCorps VISTA  Amanda Krakovitz joined the PWD Public Engagement team as an “Outreach Ambassador”—a special role created with the help of the City’s Office of Civic Engagement and Volunteer Service and their SERVE Philadelphia program.

This unique partnership joins the public service values of the Volunteers in Service to America program with PWD’s robust efforts to engage residents and build stewardship for Philly’s waterways.

Since joining the PWD team, Amanda has been using her time to assist in outreach efforts that empower communities and people and has played an important role in building awareness around a number of infrastructure projects. One of her favorite projects so far involved joining Southeast Philadelphia community groups for a fall Love Your Park cleanup that doubled as an opportunity to showcase Green City, Clean Waters improvements planned for the area.

Read her blog about the event, which included outreach to communities speaking Laotian, Khmer and Spanish.

Below, you can see a collage Amanda created using drawings kids at the Love Your Park cleanup made to show what they think a greener Philly would look like: From taking Philly students on a Schuylkill River canoe trip through the River Days watershed exploration series to hosting exhibits like “Falling Waters,” a photo exploration of the Schuylkill River’s historic navigation infrastructure, our partners at the Fairmount Water Works made 2016 a banner year for educating the region about our waterways.

It was also an important year for a future Water Works project that is sure to raise the bar for exhibits—a living freshwater mussel hatchery housed within the historic waterfront building:

In collaboration with the Partnership of the Delaware Estuary and the Academy of Natural Sciences of Drexel University, the Fairmount Water Works will bring together a team of scientists, designers, environmentalists, government agencies, communities, academic partners, architects, educators and bivalve experts to create a landmark, site-specific 530-square-foot educational resource that will introduce the world of mussels to Philadelphia and beyond.
This 530-square-foot exhibition will be opening soon to introduce the world of freshwater mussels, small animals that live in our rivers and creeks, to Philadelphia and beyond. 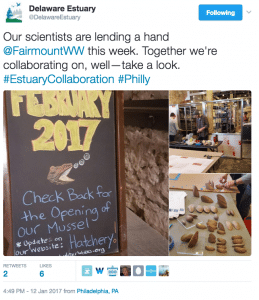 The Rivers Restoration Interpretation Project, as the exhibit is called, will this February.

When complete, the hatchery will act as an educational space where students and other visitors can observe these intriguing—and often threatened—aquatic creatures while learning about their role as unsung heroes of water quality.

The installation will also explore the concept of using large-scale mussel hatcheries as tools for improving water quality (mussels have an incredible ability to filter out pollutants) and repopulating areas in our local rivers and creeks where mussel beds have been wiped out.

In addition to design, construction, outreach and planning work conducted throughout 2016, the Water Works has been raising funds for the project, with a whopping $385,000 donated so far:

While these contributions have been extremely helpful, about $165,000 still needs to be raised to cover the overall installation costs of $550,000.

Want to help make this one-of-a-kind living science exhibit a reality? Make a tax-deductible donation toward the hatchery.

A big thank you goes out to all the organizations and people who have contributed so far.
Stay tuned for news about the opening!