The Trump administration has pursued a dirty war on clean water. As a member of Congress, I’ve spoken out against their efforts to rollback policies, like the Clean Water Rule because they ignore science and put Americans’ health at risk by endangering their drinking water.

Pennsylvania has abundant water resources with approximately 86,000 miles of streams, 404,000 acres of wetlands, 161,445 acres of lakes and 17 square miles of the Delaware estuary. Since Federal adoption of clean water legislation the Delaware River Basin is cleaner and healthier than they have been in well over a century.

These water resources are vital to overall ecosystem health and the economic well-being in the Commonwealth, and particularly the Delaware Valley. One hundred percent of Philadelphia residents get their drinking water from the Delaware and Schuylkill Rivers which are feed by small streams like Wissahickon Creek that the Clean Water Rule protects.

Because the groundwater in Pennsylvania is becoming more contaminated from legacy pollution we are increasingly reliant on having clean surface water sources for our drinking water. The large scale closings of public wells in Montgomery and Bucks Counties resulting from the chemical contamination found  after the Warminster and Willow Grove Naval Stations closed is only the most recent example of this problem. 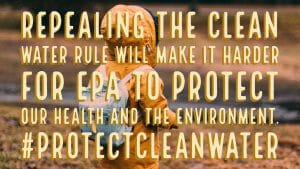 Pennsylvanians agree that we should protect our waterways. That is why nearly 50,000 of them contributed to the over one million supportive comments the previous administration received while crafting the rule.

Some opponents of the rule have used scare tactics to confuse the public by stating that there are new requirements for agriculture and that the rule covers new types of waters. This is not the case. In reality, the rule provides certainty over streams and wetlands that have historically been covered by the Clean Water Act while preserving agricultural and other common sense exemptions, including for things like maintenance of drainage ditches and stock watering ponds on dry land.

It’s our duty as elected officials to pursue policies that keep our neighborhoods safe and protect our natural resources — which is exactly what Congress intended to do with the Clean Water Act. I stand ready to work with any of my colleagues and an administration that wants to develop thoughtful changes that maintain protections for this life-sustaining resource. Until then, I’ll continue to push President Trump and EPA Administrator Scott Pruitt to reconsider this reckless repeal effort and fight to focus our efforts on fairly and fully enforcing the Clean Water Act.

Evans represents Pennsylvania’s 2nd District and is a member of the Agriculture Committee and Small Business Committee.