Potential rain could not deter a community from getting together (at a distance) to take care of Tacony Creek Park.

Residents of the 4500 and 4600 blocks of H Street, with additional volunteers from in and outside the Juniata neighborhood, spent the first day of summer, June 20, tidying up the park. 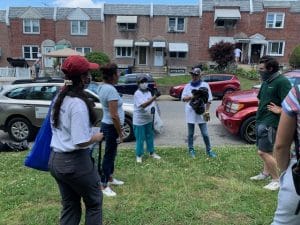 Major city-wide clean-ups were cancelled over the last couple of months as a precaution against the ongoing COVID-19 pandemic. This has not stopped litterbugs and short-dumpers from polluting the park. Sporadic trash pickup due to limited staff as a result from the pandemic, has also led to trash piling up on the residential street and blowing into the green space. Recent deer sightings drew concern about the trash as a potential harm to wildlife. There are no trash cans in the park.

Last Saturday’s cleanup was organized by Madeline Jones, the block captain of the 4500 block of H Street. A spontaneous clean-up occurred the month before, and she took a week to organize the recent clean-up by knocking on doors and creating flyers so more residents could get involved.

About 14 residents met at 11 a.m. at the park and got to work. Grabbing trash pickers, gloves, and trashbags provided by TTF, the team spread throughout the expansive landscape and maintained a social distance while masked. The clean-up was scheduled to last until noon, but the team was mostly finished by 11:30 a.m. 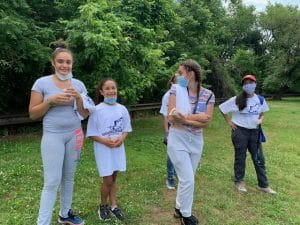 Typical items found littering the park included fast food containers, water bottles, beer cans, bags, and firework debris. Fireworks are legal in Philly, but you need permission from Philadelphia Parks & Recreation to set them off in most public spaces. For larger pieces of trash from short-dumping, residents are advised to contact 311.

At the end of the clean-up, the volunteers mingled and enjoyed hotdogs and refreshments, while getting to know their neighbors, some for the first time.

“Everyone’s getting together to do something positive for their own neighborhood, their own block,” Jones said. “It’s nice when you have the support of a couple of people.”

Jones hopes to host more clean-ups on the block and in the park at least once a month. The next clean-up is not scheduled yet. She hopes to see more youth involved.

Residents should be cautious when having large gatherings as the pandemic is still present, but can still take care of the parks. Pick a day when you’re free, reach out to some neighbors, and take a few minutes out of the day to pick up some litter. Take a walk in the trail and make it a challenge to collect at least five pieces of trash. For a bigger clean-up, wear a mask and spread out.