Tookany/Tacony-Frankford (TTF) Watershed Partnership is partnering with Ambrose Liu of the Olney Culture Lab and Dr. Matthew Smalarz of Manor College to record in-person interviews with community members as part of a two-year Tacony Creek Park Stories project. Manor College, which sits along the Jenkintown Creek at the headwaters of the TTF watershed, is developing an Oral History repository.

Tacony Creek Park Stories is a two-part effort, collecting and sharing park and neighborhood history and memories, and then working with local artists to bring these stories to life, making the collective story of Tacony Creek Park more accessible to the community. As part of this project, TTF is proud to share this blog with you based on a Spring 2020 interview with Susan Stevenson, a Philadelphia resident with roots in Lawncrest.

How did Tacony Creek Park look many years before we were born? Did it look the same? Were there many differences? What has changed?

In this interview, a resident of the area described what it was like in the Lawncrest/Cresentville area. Susan Stevenson was born in 1951 at a house close to what is now the Home Depot on Adams Avenue and the Roosevelt Boulevard. Friends Hospital across the street was around in the 1950s and much of the area was farmland and mills. The Naval depot that was down the street stored World War II airplanes and is still home to planes today.

Back then, there were no public swimming pools until 1963, so Susan, her sister and her friends would go down the creek for swimming. Now when she goes to the creek and sees families jumping into the water, she recalls the vague memories of her childhood.

“As a young child, I just got carted around. Let’s see, I forget how old I was, maybe 10, when we got another dog, and that was when we started taking the dog down to the creek for walks. From the corner of Garland Street and Tabor Road, there’s a nice hill running down to the creek, and we would go down there and sled. It was much more open than it is now. The trees have really grown up and taken over.”

She also remembered that there was more wildlife in the creek that were seen frequently such as deer and birds. It seems like the creek from the 1950s is much more “cleaner” than it is now with the sewage problem the creek is having. Although, the littering problem was a huge deal back then as it is now when she mentioned the kids in the neighborhood would take the shopping carts and sled down the hills of the park and they would leave the cart there. The environmental issues were not alarming during the 1950s, and today we are trying our best to upkeep, protect, care and clean for our parks. 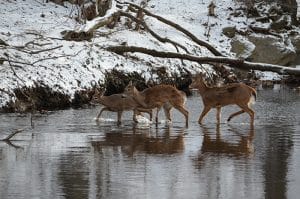 It’s wonderful to imagine the streets and the places described in the Lawncrest area during the 1950’s, and to be able to see some of those landmarks that are still here today. The landscapes may change a lot over the years, but the memories of growing up near the park will always remain fresh in your mind.

“I can recognize where things were, and okay, this curve in the creek is where my dog thought that the sandbar was a snowdrift. So, you know, you have these moments where you go, ‘Oh, yeah. That was there.’ And some of the things I remember are no longer there.”

Do you have a story to share? Whether you’ve been visiting the park for 50 years or just a few months, we’d love to hear from you. We are committed to gathering stories from the wide range of perspectives in our culturally and ethnically diverse park community. Interested in sharing your stories from the park?

Contact Doryan@ttfwatershed.org or call 215-744-1853. This project has been made possible with support from the Joseph Robert Foundation.