Veggie Mijas Promote Inclusion in the Outdoors with Nature Walk

The Philly chapter of Veggie Mijas spent one of their last programs of the year learning about Tacony Creek Park and reconnecting with the environment.

On November 14, eight walkers wound down from the stress accumulated this year by immersing themselves in nature. Most attendees were exploring Tacony Creek Park for the first time, some even coming from Camden, NJ.

Veggie Mijas is a national collective supporting people of color that are plant-based or interested in a plant-based lifestyle. The organization originally began as an Instagram page in 2017 by Amy Quichiz and Mariah Bermeo.

The project has grown since its inception, with a focus on sharing space and relearning ancestral practices through food. It runs numerous segments sharing plant-based recipes, highlighting businesses of color, and even maintaining community fridges to expand food access during COVID-19. Veggie Mijas hosts community programming such as panels, potlucks, and animal sanctuary trips.

Veggie Mijas currently has 11 chapters across the United States. The Philadelphia/Camden chapter began in 2019, went a brief hiatus, and returned in 2020 under new leadership. The Philly chapter has hosted several programs this year, mostly virtual due to the ongoing pandemic, on topics such as Channeling Your Inner Bruja and Decolonizing Beauty. The Tacony Creek Park Nature Walk was their second in-person event.

Attendees spent two hours on the trail, starting from the I & Ramona Street gateway to Bingham Street. Precautions such as wearing a mask at all times, maintaining at least six feet of distance, and having hand sanitizer on hand were in place.

Making their way down the trail, the walk kicked off with a land acknowledgement, recognizing the history of the Lenni-Lenape peoples. The tour continued with a brief history of the colonization and eventual settlement in the area, transitioning into Tacony Creek Park and the surrounding neighborhoods in modern day. These notes can be found here on TTF’s website.

Tacony Creek Park is home to over 130 bird species and other wildlife. Although spotting wildlife was not the focus of the walk, the group was joyful to see animals such as deer, golden-crowned kinglets, and a red-tailed hawk. Foliage and the conditions of the creek were also discussed. 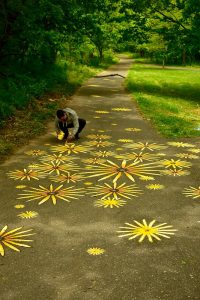 The group also learned about the various artwork along the trail, such as the murals under the Whitaker Avenue Bridge by VURT Creative and the murals by neighborhood artist Jay Coreano.  Four out of six of Coreano’s murals were spotted. TTF now has a downloadable mural guide, in addition to the bird guide and maps.

“I really liked the park and it was a great opportunity to see new parts of Philadelphia and explore different species of birds,” said Nouf Altamimi, a Temple University student. “I also enjoyed meeting new people I share interests with. I came [to Philadelphia] during COVID and didn’t get the chance to actually make friends here.”

Hosting a nature program centering people of color not only aligns with Veggie Mijas’ mission, but addresses a long-standing issue regarding the outdoors. Although technically free and supposedly accessible to anyone, it is not the case in practice.

“Society does not allow people of color to simply exist as our true selves,” said Rebeca Cintrón-Loáisiga, organizer of the Philly/Camden chapter of Veggie Mijas. “We are repeatedly reminded that spaces that center whiteness are not meant for us, with our Black siblings experiencing the majority of that discrimination,” 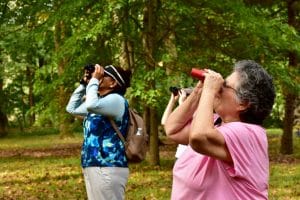 Initiatives such as Diversify the Outdoors aim to challenge this. Locally, TTF hosts various programming such as birdwalks in Spanish to be accessible to non-English speakers and People of Color Climbing Club has cultivated a community of climbers of color in Philadelphia.

“By holding spaces where we can come together as a community, we are directly defying a culture and system that undervalues us,” Cintrón-Loáisiga said. “Providing Black, Indigineous, people of color-only gatherings centering our needs, wants and happiness is a way we can heal from generational trauma and exploitation.”

The City’s new Safer at Home restrictions are in effect until the new year, resulting in official group activities in the parks involving mixed households to be suspended for the time being. However, people can continue to enjoy the outdoors on an individual level while the weather still permits. Various parks, including Tacony Creek Park, have pivoted to virtual programming.

In the future, Veggie Mijas hopes to host programming at Tacony Creek Park. Noting the litter and dumping surrounding the park and creek, members expressed interest in hosting a clean-up.

Visit TaconyCreekPark.org and TTFWatershed.org to learn more on how to get involved.