How did Tacony Creek Park look many years before we were born? Were there many differences? What has changed? TTF and partner Olney Culture Lab has been interviewing neighbors who have lived in this area to recount the changes from then to now.

In this interview, a resident of the area described what it was like in the Lawncrest/Crescentville area.

Susan Stevenson was born in 1951 at a house close to the Home Depot where Adams Avenue and the Roosevelt Boulevard meet. Friends Hospital was across the street and much of the area was still farmland and mills. The Naval Depot was close by and is still home to many World War II airplanes today.

Susan remembers much of the park from her childhood — she and her family would walk their dogs there and sled there when it snowed in the winter. There were not any swimming pools back then, so she and her sister and friends would go down to the creek to swim. 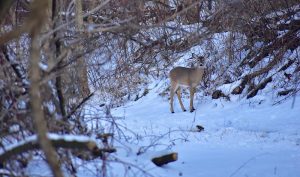 Now when she goes to the creek and see families jumping into the water, she laughs at the vague memory.  She also says that there was more wildlife seen around the creek, such as deer and birds.

It seems like the creek in the 1950s is much “cleaner” than it is now, with its regular sewage overflows. Littering was a problem back then, as it is now; neighborhood children would use shopping carts to sled down park hills and leave the carts there. Susan feels that the environmental issues were not as alarming during the 1950s, she that today, we are trying our best to upkeep, protect, care and clean for our parks.

This interview was very interesting and fun to listen, to as I was a resident of Lawncrest for 12 years. The streets she mentioned and the places that were being built there are still here today. It’s cool that I can see what she saw during the 1950s.  The landscapes may change a lot over the years but the memories of growing up near the park remained fresh in her mind.