Last month, we welcomed Arcadia University students as part of their New Student Orientation Day of Service. New students from Arcadia and orientation leaders braved high temperatures to help us remove invasive species from one of our oldest riparian buffers, located at Abington Junior High School. They gave us a great morning of hard work, and learned a little bit about the watershed in which they go to school.

This project is one of a growing number of restoration projects we have implemented in the upstream communities of Montgomery County. All of these projects help to restore the health of the suburban Philadelphia watersheds and educate communities. A riparian buffer is a creekside planting, in which native plants, trees, and shrubs act as a filter, stopping pollutants and trash from directly entering waterways. They also provide habitat for native species, and help storm water to infiltrate into the ground. Additionally, they help to reduce water temperatures, and beautify the landscape. 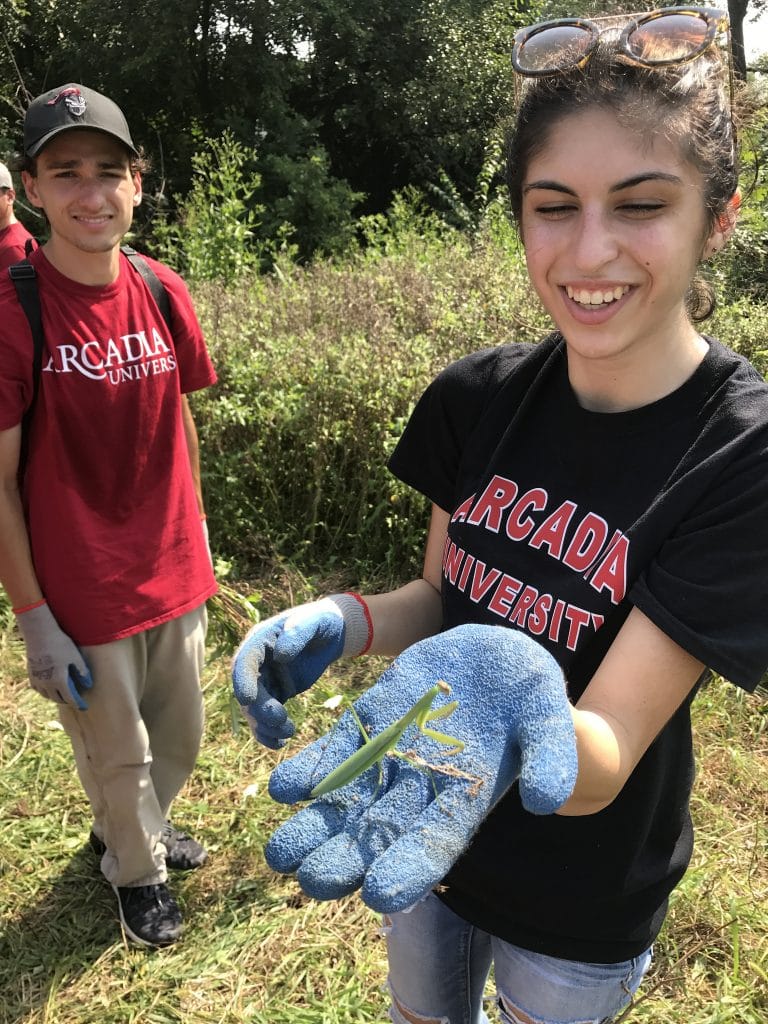 This buffer projected originated in October of 2012, when over 380 native trees and shrubs were planted along the headwaters of Baeder Creek, a tributary of the Tookany Creek. Removal of invasive species is critical to the work we do, and cannot be done without the help of wonderful volunteers. Invasive species often spread quickly, out competing native species, and often times killing off native trees and plants. These invasive species do not help to filter water as it heads to the creek, and often times have shallow roots which help to contribute to bank erosion. They also do not provide food or good habitat for native species living in the area. Removing them is imperative to maintaining the health of our restoration projects.

Some of the species that students worked to remove were thistle, porcelain berry and also purple loosestrife, all of which are common invasive species plaguing native areas. We even found plenty of different insect species and even a few birds! In total, the students removed a very large amount of invasive species, totaling 39 trash bags full of invasive plants.

We cannot thank the Arcadia students who came out enough for all of the hard work. We look forward to working with them in the future!

Interested in getting involved in your watershed? Join us an intern or volunteer!