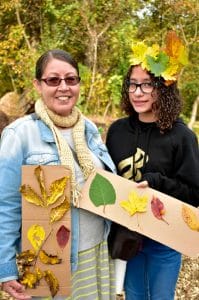 A friend is someone supportive, who you can count on, and who helps in any way to achieve a goal.

For several years, Juniata Park’s Migdalia Rosado has not only been an active participant in Tacony Creek Park programs, attending bird & nature walks with her children and grandchildren, but she has been a strong park and environmental advocate.

Migdalia spoke at the Philadelphia City Council hearing in support of Plastic Bag Legislation, regularly cleans up trash along the Tacony Creek Park Trail using the our Cleanup Kit, and has been interviewed by The Inquirer, as well as talking to neighbors and friends, about park programs and how to get involved. Our watershed and park are becoming healthier and cared for spaces for all to enjoy, thanks to caring and active volunteers like Migdalia. 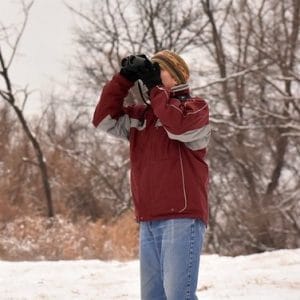 Martin Selzer has graciously shared his skills and expertise with the TTF community for many years by leading bird walks in Tacony Creek Park. As a longtime Wyncote Audubon Society leader and avid international birder, he has brought his thoughtful guidance and eagerness home to our watershed, helping park visitors better connect with the natural world around them.

Martin’s commitment to the TTF community is what has earned him the distinction as a true Watershed Hero.

The APEX class at Abington School District’s McKinley Elementary School has worked with TTF Upstream Conservation Leader Ryan to investigate the restoration site behind the school campus to observe if indicator species are present in the restored wetland along the Jenkintown Creek. The APEX Class provides education for gifted students and is led by teacher Jennifer Tanay.

Students took notes on the seasonal pool and developed a monitoring plan to determine if the pool functions as a vernal pool: a seasonal wetland that provides critical breeding habitat for several key species of salamanders and frogs. These young scientists are an inspiration for TTF and a model for students whose school is close to a creek or restoration project! 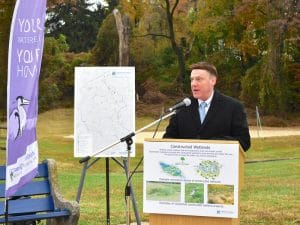 Bryan Havir served as Manager, Acting Manager, and Assistant Manager for Cheltenham Township from 1998 to April 2020.

In addition to successfully managing the township’s day-to-day operations and long-term planning, Bryan has been a passionate environmental advocate on behalf of the township. In this role, he partnered with the Philadelphia Water Department to establish and sustain the Tookany/Tacony-Frankford Watershed Partnership, and enabled TTF to develop into the premier non-profit dedicated to sustainable watershed protection and community stewardship it is today.

Bryan served as the Vice-President for Montgomery County on TTF’s Board of Directors since its incorporation in 2005 until his retirement from Cheltenham this past year. We recognize Bryan’s critical contribution to our creation, success, and ongoing partnership with Cheltenham to improve our creeks, and support our parks and trails. 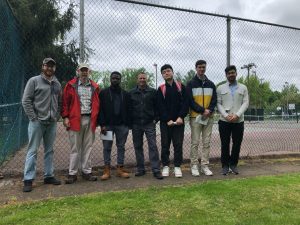 During Andy Oles’ 16 year tenure with Abington Township, he  supported TTF led projects and participated in planning and implementation. Andy attended meetings, engaged with students and volunteers, and contributed his insight towards the development of projects. He even attended a Delaware River Watershed Initiative Winter Gathering, serving as a panelist and speaking to the benefits of how partnership with TTF addressed mutual goals for public spaces.

In 2019, a Temple University senior design course utilized Abington’s Alverthorpe Park for course research. Students conducted infiltration testing, delineated drainage areas, and studied site conditions within the park. Andy met with students and helped lead the group in stormwater planning for the park. (He’s in the center of the group pictured above.) Andy facilitated efforts for the students including providing equipment and labor for the infiltration testing. He has always been invested and quick to respond to the needs of projects. TTF values Andy Oles for his work and commitment to improving the health of local watersheds, in whatever community he works! 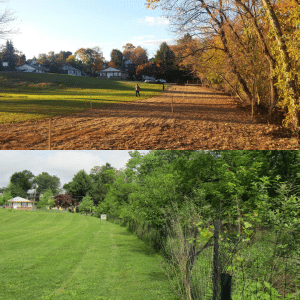 These photos provide before and after views of the multi-year restoration project along Jenkintown Creek at Abington’s Ethel Jordan Park. A PHS Treevitalize grant provided the first funding for this site, which is now also home to 2 rain gardens.

Most recently, PHS included TTF in a NFWF 5 Star Grant project which supported tree planting at Friends Hospital on Scattergood Foundation property. This property is home to a Tacony Creek tributary and a large stormwater management project funded by the Philadelphia Water Department. We are proud to honor our invaluable partnership with PHS!

We met Ryan Schultz when he served as a TTF intern! Then we got to meet his father Kenneth and more CSAA employees when they joined us for numerous planting days in Tacony Creek Park. It has been rewarding to host them a number of times as we have continued to enhance the Tabor and Olney gateway.

We were so proud to host Ken at our 2020 Volunteer Coordinator Breakfast, and to hear him speak about the importance of increasing partnerships and finding volunteer opportunities for the care of our local parks. We value our friendship with CSAA, and are proud to count Ryan, Ken and CSAA employees part of the extended TTF family. 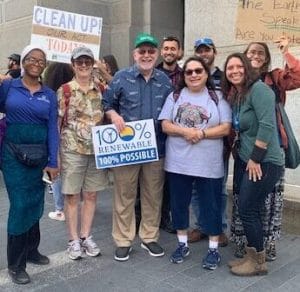 Representative Steve McCarter has been an advocate of TTF, our watershed communities, our state, and our planet for decades. He has served as a member of the Pennsylvania House of Representatives, representing the 154th legislative district since 2012. (The district is located in Montgomery and Philadelphia counties, including Cheltenham, Jenkintown, Springfield, and part of Philadelphia’s 35th Ward.)

In the legislature, Rep. McCarter serves on the Environmental Resources and Energy and Game and Fisheries Committees and has been a staunch advocate for environmental issues. He helped create the Climate Caucus, has advocated for a severance tax, and fought against a bill that would allow politicians, not scientists, to determine which species should be considered endangered. Rep. McCarter has earned a 100% Lifetime Score on the Conservation Voters of PA Pennsylvania Environmental Scorecard.

Representative McCarter has supported TTF’s work both as a legislator and personally. He has provided us with the opportunity to testify about our work at numerous public hearings, and hosted a TTF delegation of staff and volunteers in Harrisburg when he officially recognized Earth Day in 2019. He has consistently collaborated with us and promoted our events and programs. He has left us a legacy of commitment to water and climate in our backyards and across our globe.

Want to celebrate with these heroes on November 12 at our Watershed Milestones Award Ceremony & Silent Auction?