This article originally appeared here in the Germantown Friends School blog. Geoffrey is a dedicated TTF volunteer and Streamkeeper! He led the Germantown Friends School 5th Grade Environmental Action Club, whose members were among our first honorees at our 2012 TTF Watershed Milestones Award Ceremony & Reception. He has been a longtime friend of TTF, and you can read about his work with us here. 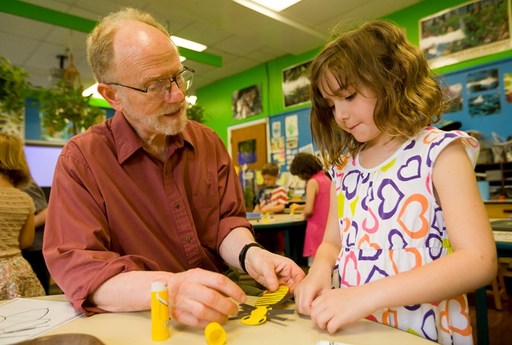 President Obama has just named 213 mathematics and science teachers as recipients of the prestigious Presidential Award for Excellence in Mathematics and Science Teaching. And Lower School science teacher, Geoffrey Selling, who retired from Germantown Friends School in 2015 after a 35-year tenure, was among the recipients.

Among the hallmarks of Geoffrey’s work was founding the Environmental Action Club at GFS, which has given hundreds of students the opportunity to be active stewards of their environment—both on campus and beyond. This is just one illustration of Geoffrey’s general approach to teaching, which he describes as hands-on and active. “For most of us—but especially for kids—learning is doing,” he says. “So, I always created as many opportunities as possible for my students to ‘do.'”

“What a well-deserved show of support for a career teacher with boundless energy for his subject and students,” said Head of School Dana Weeks. “Geoffrey always made professional growth a priority for himself and he constantly pursued new ways to meet his students where they were. His sheer enthusiasm was contagious and inspired generations of students here at GFS.”

The Presidential Award for Excellence in Mathematics and Science Teaching is awarded to outstanding K-12 science and mathematics teachers from across the country. The winners are selected by a panel of distinguished scientists, mathematicians, and educators following an initial selection process at the state level. Each nomination year of the award alternates between teachers in the kindergarten through 6th grade level, and those teaching 7th through 12th grades. The cohort of awardees named today represent two nomination years, one of teachers in kindergarten through 6th grade classrooms and the other in 7th through 12th grade classrooms. For more information on this award, click here.

To see CBS 3 coverage of Geoffrey Selling and Lower School Head of School Christy Reardon reflecting on good teaching and the importance of getting kids excited about science, click here.